Posted by Brian McCormick at 1:20AM 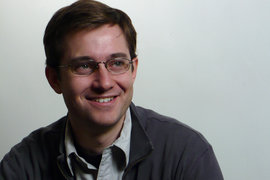 I recently had the opportunity to speak with FLEFF filmmaker Landon Van Soest, an Ithaca College alumn (‘04), who is screening his documentary “Good Fortune”  at FLEFF 2011. As the film’s director/producer, Van Soest works alongside partner producer/editor Jeremy Levine. Together, they operate their own production company, Transient Pictures.

Prior to making “Good Fortune,” Van Soest was a film major at Ithaca College, where he produced the award-winning documentary “Walking the Line.”

Van Soest was able to travel extensively while in college, including participation in a SIT study abroad program in Kenya where he lived with local families. His witness to the extreme poverty there inspired him to return to Kenya on a Fulbright grant to learn more about international development. In Kenya, he talked to people whose lives made more difficult--rather than improved-- by the influx of international aid and development. This observation led him to produce his next film, "Good Fortune."

Q: What is "Good Fortune" about?

A: "Good Fortune is about the unintended consequences of large scale international aid projects that are imposed on African communities. The film follows two very different approaches to development aid projects with strikingly similar outcomes."

Q: Can you talk about the film's subjects, Jackson and Silva?

A: "Jackson is a farmer in a rural area of who's home is being flooded by an American corporation intent on stimulating commercial agriculture in the region. Silva works as a midwife in Nairobi's largest slum, where UN Habitat has launched a major 'slum-upgrading' project.

In both cases the development organizations aim to address poverty and improve the lifestyles of the community, but for people like Jackson and Silva, the projects threaten to destroy their homes and livelihoods."

Q: How long did it take to make "Good Fortune"?

A: “There were a couple of moments where we were really on edge, but overall it went surprisingly smooth, albeit a slow process. From start to finish it’s taken about four years, with about three years of shooting.”

Q: What are your influences as a documentary filmmaker?

A: "I'm influenced by so many things its hard to know where to start.

The great thing about documentary filmmaking is that it allows you to synthesize so many things––visual arts, narrative story telling, social commentary, etc.––in one medium, so influences can come from a variety of places.

I can say that documentary has been evolving rapidly over the past ten years or so and there are a number of people pushing the medium forward, so its truly an exciting time to be making films."

Q: What advice do you have for emerging filmmakers?

It’s easy to get caught up in other things. Some people get decent jobs with production companies and get caught up with that, which isn’t a bad thing.

But if you want to be a filmmaker, the best way is to just get out there and make films.”

Q: Why is "Good Fortune" important to FLEFF?

A: "Good Fortune asks us to reassess our relationship with the developing world.

The film asserts that we, as Western citizens, project a paternalistic attitude toward other cultures, economies, and the natural world. Reassessing these relationships, and striving for a more equitable, sustainable world are the essence of what FLEFF has always embodied for me."

Because Van Soest is currently shooting for his next film in Abu Dhabi, his partner  Jeremey Levine will be on hand to discuss the film at FLEFF 2011.

What does it mean to screen "Good Fortune" at FLEFF for Van Soest ?

"I studied filmmaking at Ithaca College, where I met my co-producer Jeremy Levine. So screening at FLEFF is a wonderful homecoming for us," Van Soest explained.