Posted by Kelsey Greene at 12:40AM 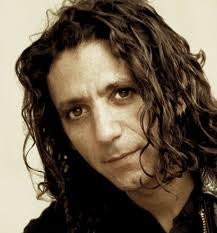 I had the chance to interview the talented Robby Aceto, who is an internationally recognized musician. He will be doing a live improvised score for the silent film "Storm Over Asia" with Chris White and Peter Dodge Storms.

KG: Can you please explain why you are drawn to the electric guitar?  What about the instrument is appealing to you?  What makes it distinct from other instruments?

RA: It's true the instrument I am most often identified with is the electric guitar. When I get a call for a tour or to work on something, it's usually my guitar playing they are looking for.

But now, in my fourth decade of doing this, I guess I've begun to consider myself a musician first, then somewhere in there, a guitarist, and then more specifically, an electric guitarist.

The fact is I play a lot of instruments.  I love all kinds of things with strings: the guitar in particular, in all its many many permutations. It's been around for centuries, it's common to many cultures all over the world, and comes in all shapes and sizes.  There's that element of connection to something age-old that resonates with me.

And this is really just about the guitar in general.  But the electric guitar; it's just another animal altogether.

The moment you introduce electricity and amplification into the picture, it really becomes another instrument. The largeness it provides, the energy, the ability to very easily alter and expand the timbal character of the instrument and the way it lends itself to sonic explorations well outside the confines of the notes found on the fretboard.  It's an instrument that can be approached in unlimited ways and offers immense creative possibility.

KG: What do you view as your career highlights and why?

RA: There are many moments that come to mind: places in the world I've had the chance to go, performances I've been a part of, amazing people I've worked with...

Unless you are the kind of artist who works exclusively by yourself, music is something you do with others. For that reason, the relationships you develop over the years become very significant… the caliber of musicianship, the quality of creativity, the ability to think alike and share some kind of end vision.

So for me it's not so much about where I've been and what I've done as it's about the incredible people I've had the good fortune to work with and forge lasting friendships with. Every relationship contributes in some way to you becoming the musician you are always trying to become, and I've been extremely fortunate to have worked with some of the best: Chris Frantz & Tina Weymouth of the Talking Heads, Mick Karn, David Torn, the always amazing Douglas September...so many others come to mind... great friends, and fantastic artists.

All that said, and for almost the opposite reasons, I can also say that I think completing the score for "Saved By Deportation" stands out for me as a real turning point; it was the first score I did completely on my own and featured a type of writing that was very new to me at the time. It put me on a path I am very much still following today.

KG: How did you become involved with music scores for films?

RA: I guess I started out as a collaborator, playing on scores by other people.  That's a very high-pressure situation, especially if you are working to deadlines and on a studio clock.

I finally got smart about ten or eleven years ago and was able to build my own production room.

Two things happened as a result of that; working in my own room made it possible to continue to collaborate with others, but I could work on my own clock and without packing up and traveling to another city. So even though I was going out the door less, I was still able to more or less maintain the income stream I had worked hard to develop.

I found when I worked without someone looking over my shoulder, I became better at, and more comfortable experimenting with different ways of getting sounds from the guitar to tape, and this freed me up to try to be more inventive, to look at using other instruments in my compositions and to develop my skills as a mixer.

And most importantly, it allowed me to focus more deliberately on my own output. I made a conscious effort to put myself in situations where I had to deliver on deadline, but deliver work I always felt was my best.

KG: What do you enjoy about creating music scores for films?

RA: I like being in the "hot seat" and being solely responsible for getting the thing done. I enjoy working within the changing demands placed on the role of music in a film; the idea that it's solitary work, but ultimately a shared outcome.

KG: How did you get involved with FLEFF?

RA: My first FLEFF as a performer, I was asked to be in a performing group to help realize a work by the wonderful composer/violinist Judy Hyman. It was a live performance of a fairly large group to a commissioned film with spoken-word component, also performed live.

Before that, the environmental issues film, "The God Squad" by Emily Hart (that I worked on with composer Bobby Lurie) premiered at the very first FLEFF, back when it was still jointly run at Cornell, IC and Wells colleges.

"Saved By Deportation" also screened at FLEFF a few years ago. So I guess I have a history now with the festival.

KG: What do you enjoy about working with FLEFF?

RA: It's a world-class film festival right here in our back yard...what could be better!

KG: What are you looking forward to about this year’s festival?

As you probably know, last year's FLEFF had a different paradigm and there wasn't much opportunity for the live-improvisation-to-silent-film that has become a sort of hallmark of the festival. For the 2010 festival, Patty Zimmerman invited me to work with Anne Michel and Phil Wilde on developing content for the FLEFF online programming streams, which I really enjoyed doing.

But, I missed doing a live performance. So this year, Chris, Peter and I are back together doing another live improvised score for a really fantastic film; Pudovkin's landmark "Storm Over Asia."

It's an important film in many respects; it's the first film to be shot in Mongolia, features some amazing camera work, and is deeply rooted in the Marxist dialectic, telling the story of the Revolution through the eyes of a true believer.

For me, it's now doubly significant, given the disaster that was the ultimate result of the way the great social experiment of Marxism eventually played out; an economic and human disaster of almost epic proportions.

I'm also looking forward to improvising with those two great musicians... and excited to be performing with "Storm Over Asia.”

KG: You mentioned improvising. Can you explain how you, Chris and Peter will be approaching your score for "Storm Over Asia?"

RA: Chris, Peter and I have done several performances at FLEFF, and at screenings for the film school.

Traditionally, we have worked in a totally improvisatory setting; meaning the score is invented live to picture and is a one-time event, impossible to recreate.

For this reason, it's unlike other scores. It moves almost into the realm of ethnic music; you have to work at it on many different levels.

We usually have some minimal thematic materials to draw from, but only very minimal. Instead, we focus on what instruments to use, what kind of "setting" we want to inhabit, and then in rehearsals, we set about working to develop a group vocabulary and a way to communicate.

"Storm Over Asia" is a great film and I have a great feeling about how we might interact with it. I've also been an admirer of Pudovkin since looking at his films when I was in college, so it's something I'm really looking forward to doing.