Posted by Kelsey Greene at 10:00AM 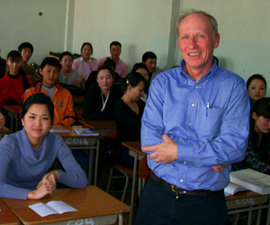 Today I was able to catch busy, co-director Thomas Shevory for an interview about his experience with FLEFF.

He has been highly involved throughout the festival’s history and became co-director in 2006.

When he’s not working out FLEFF details with co-director Patricia Zimmerman, he educates students on issues related to law, public policy, and popular culture as a professor of politics at Ithaca College. His academic work gives special attention to health and environment, which is one of the reasons he became involved with the festival.

What are some of the challenges you face?

Well, there’s a lot happening, so keeping everything straight is a challenge. There are so many things to juggle, so many elements. so many people involved.   Just trying to keep track of everything and keeping events and people on target, I think that’s our biggest challenge.

Some things are more routine than others.  Finalizing films and filmmakers for Cinemapolis seems to be the biggest challenge at the moment.  Patty has been working the commercial film side of things with Lynne Cohen and Rich Szanyi, who manage Seventh Art.  It’s a difficult world to break into, but they are doing a great job.

Is there anything specific you’re looking forward to with this year’s event?

I’m looking forward to, well everything.

The Rite of Spring event with Mahler lieder featuring vocalist Brad (Hougham) and pianists Jairo (Geronymo) and Debbie (Martin), and film projection, that’ll be fantastic. They’re just great musicians who we’ve worked with in the past, and that’ll be a big, spectacular event, always a highlight.  Also, we have some fantastic guests, including venerable new media artist, Philip Mallory Jones and Laura Deutch...an IC alum...with her innovative project, Messages in Motion. Also Tom Swartwout will be on campus. He's a highly regarded film editor (who has worked with Sidney Lumet.)

I'm excited to host Tom and Laura in a class I'm teaching.  My colleague Beth Harris is organizing an event on the Egyptian uprising, with two filmmaker/activists who have just returned from Cairo, Menna Kahlil and Michael Kennedy.

The downtown music events, live music silent film events you know, they are also very popular, and deservedly so. They’re in a sense unexpected, because live music performed with film always creates unforeseen resonances.  Even if you've been to the rehearsal, the event itself always surprises, and often mesmerizes.

And then we’re bringing in several film directors this year, so I’m looking forward to that, including Tina Mabry (Mississippi Damned), IC alums Jeremy Levine and Landon Van Soest (Good Fortune), David Brancaccio (public radio's Marketplace, and his film Fixing the Future), Jenny Stein and James Laveck (Peaceable Kingdom), Maple Raza (Bastards of Utopia), Danny Schecter (the "news dissector"), and Helen DeMichiel (Lunch Love Community). (Helen will also be on campus for much of the week.)

The downtown events are fun because everyone is together.  It's a combination social event, big college seminar..media confab.  Well it's a festival.   And a chance to get together with people we haven't seen in a while.

And we'll be opening at Cinemapolis this year with the premier of Uncorked, a series of webisodes featuring wine and upstate New York.  We've partnered with Park Media Lab (Carol Jennings) and the Ithaca/Tompkins County Convention Center Visitors Bureau (Fred Bonn) and the Finger Lakes Wine Center.  (Be there on the evening of Sunday April 10th!)

Also, it'll be great to be in the new theaters. The theaters are beautiful, plus excellent screens and good projection.  It’s a very open, welcoming space.  A great place to gather.

I'll tell you something else...a lot my colleagues have mentioned how great the mini-courses look. And, if I were a student, I'd definitely enroll in one.

What have you taken away from you involvement with FLEFF throughout the years?

I came into this through the door of environmental politics, and FLEFF is a different kind of space, but still a very political one on many levels.  I find the political aspects of an environmental film festival (as we define it) to be very compelling, and there's a politics to the whole concept of a festival, that is convening people in public spaces to engage ideas.

In many ways, it has been an eye- opening experience. I've learned so much, almost like a second career, a different trajectory, a new path. I had never really organized events on that kind of scale that FLEFF involves.  I was definitely not schooled as an events planner, believe me.

Is there anything else you would like to add?

I really appreciate all the people we work with, especially the interns.

What makes the festival, actually any festival, worthwhile are the people involved.  The interns, the faculty, our web design and social media marketing team (Joanne Hindman and Steve Shoemaker),  the guests, the musicians, Lynne and Rich at the theaters, Anne Michel and Phil Wilde (our producers and now intern directors),  writing prof Barb Adams (who is organizing prose readings at Buffalo Street Books), Warren Schlesinger (who organizes the mini-courses and our FLEFF Fellows program), the filmmakers, the new media artists, the activists, the alums, the students... and the ideas....that's what keeps me coming back.

Also, Patty is a great person to work with.