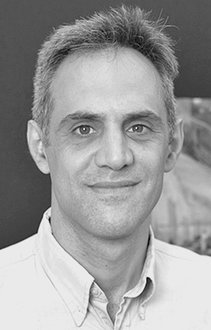 The first thing I learned from Dr. Jonathan Ablard is that sometimes you should try the gluten-free cookie “just to be weird.”

I met the historian/professor/co-director of Ithaca College’s Latin American studies at a café on a rainy Wednesday afternoon.

Dr. Ablard’s interest in Latin America originated from growing up in the D.C. area where he met many people from El Salvador and Honduras. It was the ‘70s and ‘80s, a time when many Latin American countries were staging revolutions to overturn dictatorships.

At grad school at the University of New Mexico, Dr. Ablard picked up some library books about psychiatry in Argentina. His interest in this topic culminated in Madness in Buenos Aires, his dissertation-turned book. That led him to a sociologist friend who peaked his interest in studying military service, and since then, Dr. Ablard has focused primarily on how the military was “used to create the Argentine state and to build a sense of national identity.”

Dr. Ablard’s research process centers on looking for patterns. He reads through archives and identifies a pattern, like how during dictatorships, hundreds of Argentinian soldiers deserted the military. He then tries to figure out where these patterns fit into what historians already know.

“I’m interested in people who didn’t write diaries or books about themselves, so their records appear in things like psychiatric reports or trial records,” he says.

He approaches his teaching as a way to help North Americans who don’t have a connection to Latin America to understand the complexities of the region. His work is more than just translating words, but it is looking at “how people in Argentina in 1920 would have read [the words] and understood the words.” That’s how Dr. Ablard thinks about his work.

FLEFF is exciting to Dr. Ablard because it’s stimulating in a different way than the archive-digging and article-reading he usually does.

Dr. Ablard’s role in FLEFF this year revolves around El Ultimo Malon. The 1917 Argentine silent film, whose title translates to “The Last Indian Raid,” is a depiction of an actual 1904 indigenous uprising that occurred about two-hundred miles outside Buenos Aires. Dr. Ablard’s research seeks to answer the questions, “what is the story of this film?” and “what have historians done in talking about the actual Indian raid?”

The film will be accompanied by a live score, and preceded by a performance Dr. Ablard is co-writing with FLEFF co-director, Dr. Patricia Zimmermann. It will be performed by Ithaca College theatre professor, Cynthia Henderson.

Dr. Ablard views both the performance and the film as “stimulating and fraught with interesting tensions.” In the framework of this year’s theme, DISRUPTIONS, he is looking forward to hearing how the film challenged viewers’ perspectives.

That intellectual challenge is what he loves about FLEFF. Dr. Ablard’s first year at the festival, he led a discussion about the Uruguayan rugby team that crashed into the Andes and resorted to cannibalism. In 2014, he co-taught a mini course with an environmental studies professor called “Garbage, Oil, and Other Dirty Stuff,” all about commodities in film. FLEFF offers Dr. Ablard the opportunity to take his foundations as a historian and apply his expertise to public health, literature, film, and more.

Dr. Ablard’s most widely read article is not about Argentine psychiatry or military, but about attendance policies. He has a tradition called “Tribute,” where if a student misses one of his classes, they must repay their classmates by paying tribute to them by, for example, sharing brownies or Capri Suns. Bringing this humor and reflection to the action of showing up, Dr. Ablard hopes his students contemplate “why we’re here, rather than why we must be here.”

If there’s one thing to take away from Dr. Ablard, it is the idea that exploring the world through many different lenses and combining many different disciplines will only enrich your life.

And always try that thing just to be weird.