Posted by Kristina DiNardi at 10:19PM 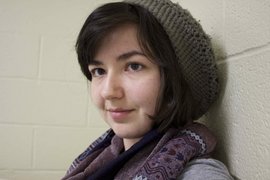 Hi to all FLEFF-goers and cinephiles,

My name is Kris DiNardi. I am a sophomore majoring in Writing for Film, Television and Emerging Media B.F.A. and I’m also minoring in International Communications. I come from Pittsburgh, Pennsylvania. For this semester, I am blogger for the 19th annual Finger Lakes Environmental Film Festival (FLEFF).

Other than with FLEFF, I am involved with The Ithacan, the college’s award-winning weekly newspaper, as Chief Copy Editor. When I am not at The Ithacan, I am either helping out Ithaca College International Club as its secretary or recruiting participants and teams for Colleges Against Cancer’s Ithaca College Relay for Life.

After studying film industries in “Introduction to Film Aesthetics and Analysis” at Ithaca College and “Media Industries in Korea” at Hanyang University, I decided to become a FLEFF blogger because I have an interest in international media and its industries.

From my youth, I always had an interest in international media and different cultures. When I was little, my best friend’s family owned a Chinese restaurant. For many childhood summers, we would spend time at the restaurant or talk about Japanese video games.

Later on, during my high school years, I participated in many filmmaking and screenwriting apprenticeships with The Pittsburgh Filmmakers and Point Park University.

My first time hearing about FLEFF was in “Introduction to Film Aesthetics and Analysis” in which our professors were encouraging us to take on of the mini-courses that were available to take during the festival. Because of this encouragement, I decided to take the “FLEFF Festivals” course, where we were able to explore the various programming that FLEFF has to offer as Junior Fellows.

After taking this course, I was hooked to FLEFF, as in the festival.

I was able to see a wide-array of films at Cinemapolis as part of FLEFF’s programming, such as The Amazing Catfish and Juan Agustin Marquez’s world-premiere of The Last Colony. These screening are rare opportunities to see films that are not widely available or accessible in the United States.

FLEFF gave me the opportunity to meet with international distributors and to learn more about various film industries. I am forever grateful for my previous experiences with FLEFF.

For this year’s FLEFF, I am excited to experience all the different types of programming that FLEFF is offering and to see as many films at Cinemapolis.

Maybe you’ll see me. I always wear a hat.

Hope to see you at FLEFF!