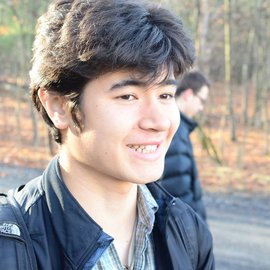 I rely on maps all the time.  I took it as a given that maps were dependable, and unbiased.

At a FLEFF event led by Leila Nadir and Cary Peppermint I found out that maps are really perspectives.  Each one represents a different agenda.

The purpose of Nadir and Peppermint’s project was to create an application for smartphones that encouraged intimacy and interaction with the user’s environment.

The app, called Indeterminate Hikes +, used smartphone technology to create routes that focused on engagement with the environment as opposed commuter-based quick transport.

Prior to attending this FLEFF event I had only been concerned about the most efficient route and, consequently, I repeated the same paths often.  Now, I try to think up a different ways to my regular destinations.  Since one FLEFF event was so influential I was interested in taking a more immersive approach this year by becoming a blogger.

Currently, I am pursuing a Bachelor of Science degree in Cinema and Photography with a concentration in Production.  Even though my major includes lots of hands on work I’ve come to think that creating film also requires awareness of other media, such as books, painting and journalistic work.  In my opinion this enriches the end result considerably.

I first came to this point of view when my dad gave me a copy of Labyrinths by the Argentinean writer Jorge Luis Borges.  What made the stories in Labyrinths so rich was Borges’ encyclopedic knowledge of literature.  He was known for spending a great deal of time in libraries reading through as many books as he could.  Some of his stories even take place in libraries.

Since then, I have tried to engage with as many genres of media as I can.  This engagement ranges from picking books to read at random off the shelves of the IC library to attending the numerous FLEFF events.

Before coming to Ithaca I spent a good portion of my life in Brooksville, a relatively small town on the coast of Maine.  My parents (both architects) designed and built our house.  The architectural blueprints got me interested in geometric patterns.  Even though I chose not to pursue math I have always maintained an interest in it and attempted to integrate it into the film projects I work on.

One of my apprehensions going into FLEFF is the number of people who will have access to what I write.  Most of my writing up to this point has only been seen by my teachers and peers.

FLEFF’s analysis of what may constitute a habitat challenged the connotations I previously had with the term.  I had the impression that habitats were places of relative harmony and safety; however, FLEFF questions whether habitats can refer to warzones, and databases as well.  What do you consider a habitat?