Posted by Rebecca Cox at 7:08PM 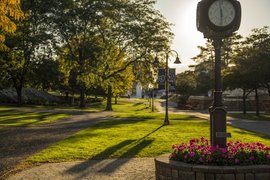 As Ithaca College students we have the Finger Lakes Environmental Film Festival right in our backyard. This year, there will be over 100 events from March 28  - April 3 including film screenings, readings, labs, and new media art presentations. Since FLEFF is just around the corner, here are three reasons Ithaca College Students should attend this year’s festival.

1. Interact with guests from around the world. Many filmmakers and artists at FLEFF hold discussions and labs. They are available to interact with students at each event. In fact, many of these artists love to speak with students and give advice. Previous guests include award-winning filmmaker Laura Lazine whose first feature film Tupac: Resurrection was nomainted for an Academy Award in 2005.

2. You will see films and projects you may not get to see anywhere else. In the past, FLEFF has screened films such as The Amazing Catfish from Mexico, Cotton from China, and Miners Shot Down from South Africa. These are just some of the international films that have been shown at FLEFF. These films raise issues that are pertinent to their respective countries. Immersing in these atmospheres is a great way to learn about other cultures.

Why do you think Ithaca College students should attend FLEFF?