John D. Scott: On Dissonance, FLEFF 2014, and everything in between

Posted by Blaize Hall at 3:02PM 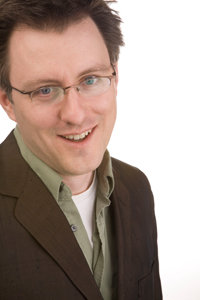 Tufts of hair poke every which way after he runs his hands over his head, making him look all the more like a passionate artist.  John Scott leans back in his chair and exhales slowly.  There is a long pause, the only sound in the room is the quiet hum of a Macbook Pro with AVID video editing software, and a class syllabus both pulled up on the screen.

Then he chuckles.  “I’ve been having these conversations with a lot of people about football.  I’m really against it.  I think it’s this dangerous thing that people do and they wreck their brains playing this game... Part of it is, I think, because I’m from Canada, and I didn’t grow up with this game the way Americans have.”

“When you come from a different place, and grow up in a different model, it puts  you in opposition to the culture in a way that can create some really good discussions.”
“There’s lots of things where I feel like I agree with the mainstream model.  Then there are other things where I feel like I’m sort of this rock in the river, and maybe the river is slowly wearing me away, or maybe I’m diverting the path of the water.”

This is Scott’s own experience with dissonance.  On the topic as FLEFF 2014’s theme, he praised it.  “I’m definitely interested in having a media landscape that’s got some variety,” he expressed.  He describes the current model for major film distribution as limiting.

John Scott knows all too well the struggles facing independent filmmakers, documentarians, and especially those in the business of documentary shorts.  Having successfully distributed his own shorts, including Sandpiper (2011), The First Death in Nova Scotia (2012), One Art (2011), and a feature length documentary, Scouts Are Cancelled (2007), he has plenty of first hand accounts of wrestling for grants, taking on producing the work he is also directing, and spending countless hours working to circulate his films.
Scott’s films have been featured in FLEFF for three straight years.  Scouts Are Cancelled had its U.S. premiere at FLEFF in 2008 after coming off of the Hot Docs Canadian International Documentary Film Festival.  His most recent short, In The Waiting Room (2013), is slated to show at FLEFF this season.

He says he appreciates that FLEFF includes local films as well as international.  “I think it’s great when you can get a collection of them (short films) together from the same region.  It’s interesting to have a model that’s focused on local concerns...it has its own ethos.  Maybe there will be different perspectives that will come out of that.”

When asked what the biggest benefit is of festivals in general, he replied, “audiences”, without a moment’s hesitation.  Scott described the dialogue that happens at festivals as the singular most beneficial aspect of getting people together in one place to view media not available in mainstream forums.  “When you’re at a film festival, you can FEEL the energy.”

Will you come be part of the energy this year at FLEFF?