Posted by Andrew Ronald at 1:38AM 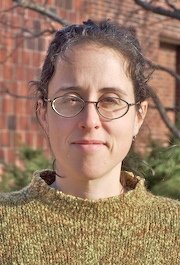 Anyone with an interest in film and independent cinema should certainly take the time to get to know Karen Rodriguez, the curator of the Upstate Filmmaker Showcase for FLEFF at Cinemapolis. I recently had the opportunity to interview Rodriguez and learned a lot about her.

Rodriguez has had outstanding experience with production, videography, cinematography and lighting as her academic career has spanned across the historic country of Germany and the bustling city of Boston. As she studied photography, Super-8 and film analysis, her passion for film exploded and led her to independently produce features and shorts, followed by working at the Thaw festival where "we screened narrative, experimental and documentary short films and videos and it was a complete blast! My favorite parts of filmmaking are the actual production and attending the film festivals!"

"I think of myself as a bit of a generalist when it comes to production work...My own work that I'm most excited about falls into the personal/experimental form. While I love the camaraderie and focus of a large crew, my ideal mode of production would be analogous to a singer-songwriter writing a song where the filmmaker has an idea, picks up a camera and makes it happen." To me, this sounds like a beautiful sentiment as art forms are often compared to each other and it is interesting to think of film on such a microscopic scale.

"Microtopias is a rich metaphor and brings up for me many ideas. Most concretely, it reminds me of the idea that all politics are local meaning that sometimes it is difficult to think about affecting the world on a large scale, but that small efforts, local efforts can make a difference. It's connecting these local efforts to one another that is important for making large scale change."

A strong recommendation Rodriguez deploys in her interview address the need to stay independent and work outside of the industry. This singularity, even if you are an independent documentary producer tackling corrupt politics and popular culture through a critical lens, facilitates the arduous process behind developing your own voice and artistic aesthetic that differs from corporatized media.

"In addition to the two Upstate Shorts screenings, I'm looking forward to Patrick Winter's talk on sound design, the talk with Laura Kissel and Matt Podolsky on new forms of environmental documentary, "Veins in the Gulf," and "100 Short Films about Water," anything with live music accompaniment, and of course, the parties!"