Posted by Tianhong Yang at 4:55PM 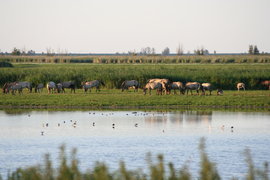 The word Landscape refers to a particular area of land or of activity, featuring natural sceneries or human cultures. The 19th annual Finger Lakes Environmental Film Festival has also announced its theme of LANDSCAPES.

News headlines from mountains, forests, and oceans suggest we are in a world of trouble. Fresh water is increasingly scarce around the globe, owing not only to heavy water consumption but also widespread pollution. Agricultural fields are depleted from years of intensive cropping and from the ongoing application of fertilizers. Global temperatures are on the rise, and the world’s oceans are at severe risk.

And yet in Flevoland, a province in the Netherland, wild species are thriving without signs of collapse. Red deer roam the landscape, feral horses travel in herds, and wild birds fly across the sky. Oostvaardersplassen, a 15,000-acre wilderness, is intriguing as it resists human pollution and influence.

However, Oostvaardersplassen is by no means natural. Created by European biologists in the 1980s, this park had previously been plain lowlands devoid of wildlife. The landscape has been deliberately crafted to produce such animals through various conservation practices. Animals and plants were carefully introduced, and the place was intended to mimic a late Pleistocene ecology. Therefore, Oostvaardersplassen is neither natural nor social, but both.

The marks of human creation and destruction of landscapes are omnipresent. In fact, human maintains a longstanding relationship to the non-human world with animals, plants, forests, and waterways. Oostvaardersplassen and metropolis cities are both landscapes of Anthropocene, as society and the environment are inseparable.

What are your ideas, thoughts, and questions around this year’s theme?