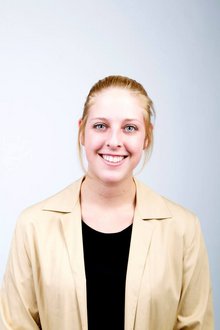 What do you do with leftover coffee?

Throughout the week, Kimberly Capehart collects the coffee she didn’t drink into a mason jar.  Little by little, the liquid adds up to a full amount that Kim can enjoy on a Friday afternoon.

With her hands cupped around the coffee, it’s easy to feel Kim’s excitement about this year’s FLEFF with her wide smile.

She is most looking forward to the film “Concerning Violence,” which is based on the writings of Frantz Fanon.  Kim calls Fanon an “accessible writer” and considers his writing to be the introduction to her Politics minor.

After having read Fanon’s work over a year ago, Kim said it’d be interesting to watch the film to see her progress of understanding – “a barometer of where I am.”

Compared to the previous FLEFF themes, Kim feels like HABITATS is a more “colloquial term” and an easier topic to make connections.  She recalls how the previous FLEFF theme DISSONANCE wasn’t something she naturally would have thought about.  After the FLEFF 2014 ended, she saw the word ‘dissonance’ almost everywhere and humorously thought, “now it shows up.”

Her “own progress with the FLEFF themes” is one thing Kim enjoys discovering since she loves challenging herself in new ways.

Compared to when she first came to Ithaca, Kim recalled how differently she feels now. “I thought I knew who I was but I didn’t.”  It seems like Kim’s own growth over the years shines through her pride.

Through her time at IC, Kim has learned to “not be afraid to navigate” through various classes.  Previously, Kim thought that she couldn’t write, and this belief was why she initially hated writing.  After practice and blogging for FLEFF, Kim found out she was actually great at writing.

It would be remiss to not mention how being a Girl Scouts leader has also built Kim’s confidence and opened opportunities.

“I want others to be inspired by what I’m inspired by.”  Kim recollects how one time she showed a girl how a camera worked, and by the end, the girl told Kim that she wanted to be a filmmaker when she grew up.

With her upcoming graduation this December, Kim is thinking about her own habitat and of where she will end up.  She plans to take her two passions for politics and documentaries and “explode them.”  She wants to combine her personal and academic interests together and to find their intersections.

Little by little, drop by drop, Kim’s time in Ithaca, NY has changed her.  She certainly is not leaving in the same character she came.

“Instead of living one-dimensionally, I see things differently, in ways I wouldn’t have formerly.”