Posted by Lindsay Harrop at 10:21PM 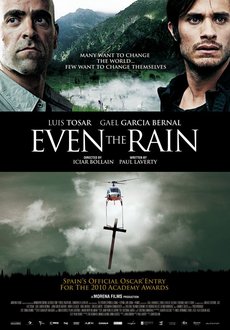 Even the Rain just finished screening and I have to say that is was AMAZING. A great film and one that I'm so glad I got to see on the big screen. We had a Q&A with casting director (and IC alum!) Rodrigo Bellott after the screening. Here are some highlights from the Q&A:

A: Would you call it a docu-drama?
RB: Yeah but everything was re-created... Daniel was part of the Gas Wars, not the Water Wars. He's not a trained actor. In the original screenplay his character is forty but we adjusted the screenplay to fit this actor. Belen is from the community. So is Theresa.

A: How did you pay the indigenous people?
RB: We asked them how they wanted to get paid. They said they didn't want money. For them, this is a community thing. They wanted things that benefited the community. So we're building schools, we got them a road truck, that sort of thing.

A: How did you become a casting director after graduating from IC?
RB: I still don't know what the hell is going on. I'm also a filmmaker and made a film right after graduation called "Sexual Dependency," which was Bolivia's official Oscar entry for 2004. For some random reasons Terrence Mallick saw this in Berlin. From there Steven Soderbergh saw it and asked me to help him cast "Che." I had no idea how to cast a film. But Benecio Del Toro got Best Actor at Cannes and Stephen said, "Be careful, you're going to be casting a lot of other films."

Rodrigo also talked about the process of casting the actor who played Daniel, saying that he couldn't find the right person for the script. Eventually, he found Juan Carlos Aduviri, a nonprofessional actor who had been part of the Gas Wars. A lot of the extras in the film were people involved in the actual Water Wars in Bolivia. Rodrigo said, "This is there film... We were lucky to have the real people involved in these events."

This was a SOLD OUT screening, so thanks to everyone who showed up! Rodrigo Bellott will be on campus tomorrow (Friday, April 15) as part of the "How to Get Your Break" Panel at 4:00 in Williams 225. If you missed tonight, "Even the Rain" will be screening again Saturday, April 16 at 7:10.