Posted by Matthew Reis at 4:43PM 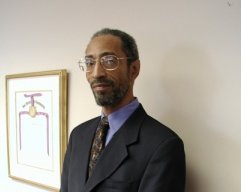 We are a few minutes from the start of Phil Jones' multimedia presentation on the transition from the real world to "Second Life's" virtual world. Phil Jones has a long history in Ithaca, NY. While he lives in Ohio now he graduated from Cornell with an MFA in Creative Writing in the early 70s. He also started up "Ithaca Video Projects Inc." in 1971 and a video festival grew out of that and debuted in 1974. Over a nine year period the festival showed works by famous filmmakers such as Bill Viola. "Ithaca Video Projects" growth and foundation was sustained due to the formation of an eclectic artists collective in the Cayuga Heights neighborhood of Ithaca.

It's 4:15pm and the event has just begun. Megan Roberts, an Associate Television-Radio Professor at Ithaca College just introduced Phil. She's known Phil for a long time and outlined some of his numerous achievements.

Phil only started to talk a few moments ago and he's already told some inspiring stories. For example during one winter break at Cornell Phil had his first experience with video editing.