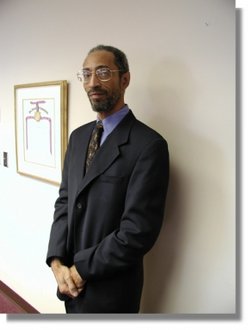 I'm sitting in Textor hall, room 101, waiting for speaker Philip Mallory Jones to begin his presentation. I had previously conducted an interview with Mr.Mallory, and found he was working in a field that I am currently trying to learn and explore. I wanted to attend one of his presentations, and was disheartened to learn they were during my classes. Then I found out he was giving a guest lecture during another class, and I was relieved.

I look around and see many students, and a few interns aside from myself. Tom is giving his introduction of Mr.Mallory, detailing the numerous accomplishments of Mr.Jones. Tom is explaining how Mr. Jones has won numerous awards for films, digital painting and much more. Mr. Jones work has been seen around the world, and as Tom says, "Mr.Jones is a big deal."

Mr.Jones has begun his lecture, detailing his past living in Ithaca, having also been faculty for three years. He started shooting video in 1969, when Ithaca was one of the New Media hubs of the planet. It was internationally recognized as a pioneer in the new form of small format video.

One of the things that attracted Mr.Mallory to video was that there were "no rules." Mr.Jones explains that the work he began back in the seventies created and influenced the media courses and ideas available today. Ultimately, it was the idea of the frontier that attracted Mr.Jones to video, "the ability to express personal vision."

Mr.Jones details the excitement he felt at making his very first electronic edit, and knowing "this is the future." From that moment on, he "didn't look back."

He explains how the early technology was very much different from what it is today, but never less exciting. Today, Mr.Jones' new frontier is in synthetic worlds. Making "interactive 3D environments. There are opportunities in these fields that weren't available before. It's magic, it's truly magical, to re-create your own vision in a virtual world."

Mr.Jones is now about to screen a piece of "Machinima." This particular piece is a virtual memoir, meant to be viewed in three dimensions, "narrative, vision, and sound." The piece is called, "In the Sweet Bye and Bye.

As the piece rolls on, we see floating image planes with differing projections suspended in empty space. A voice kicks in and begins the narrative, speaking as if a letter is being read. Lights and moving images move across the screen amongst the still images. A male voice and a female voice interweave stories and poems while text and images, old and new, of African Americans drift through the screen. The poems are dark and melancholic, recalling racial injustices gone by.

The piece, "began as an installation in gallery space. But this is not the way this work needs to be seen." Mr.Jones explains, by making the work digital, on a screen, it becomes luminous, instead of reflected. He explains that the reflected light changes and masks the intended colors. You can see how the work is meant to look by going to www.philipmalloryjones.com

In the Sweet Bye and Bye, "took me to the next step" explains Mr.Jones, "to a new dimension." A new piece of machinima begins, called Bronzeville Etudes and Riffs. He's been working on this piece for two years. His idea is to make a 3D graphic novel, an "exploded collage."The four minute piece begins, it's a tour of an entirely virtual neighborhood. Slow piano music plays while we see streets, building interiors and exteriors, and various other props.

We see old photographs and flyers that have been digitally integrated into the environment, showing past locations and times and people like louis Armstrong.

A new Video titled "Paragon Show Lounge." begins. The title is the name of a modeled building from the previous film. This video is a tour of this building's interior. He explains that although in the video has music, the real environment would not have music "floating in the air, it will be integrated." For instance, turning on a juke box would play the music.

The video pans and zooms around an entirely digital lounge. There's a stage, complete with a band and stage lights. Patrons sit around low lighted tables enjoying drinks and dancing. The people are frozen in the scene, and a man plays the piano.

Now Mr.Jones takes questions. The first inquires how long it takes to create an environment such as the lounge. He explains that it can take years, and this lounge has taken three years. He has gotten to the point where he can start over. He explains that he is creating a map of the actual city of Bronzeville to recreate the look of the time. Making the map is a way to stay productive while facing problems, such as how to make several dozen characters interact in the environment.

A solution to that problem is to make many of them NPCs or "non player characters." This models would not be driven by humans, but programmed to interact with the characters that are. He explains that the project may not even be avatar based, but entirely scripted, like the game, "Myst."

One solution to this is the Ipad, where you can move through a scripted world as intended by designers like Mr.Jones.

The next question is about attaining right to songs or music. Mr.Jones explains his strategy is to, "hold my breath. I wouldn't be surprised if I post this on the internet and get a nasty letter." He explains that he knows that eventually rights will have to be purchased for various elements, and that's a "necessary part of the problem."

The next question is about being able to differentiate your ideas from ideas you may pick up from other artists simply by surfing the internet. "Is it difficult, do you ever walk that line?"

Mr. Jones explains, "The short answer is no." He then details that accepting influence from another artist is different from simply taking someones work. You can have a "conversation" with another artist, but you can also change the conversation. He details how many of his influences are 2D artists, and he is working in "time" which changes the conversation.

The next question asks if Mr.Jones draws designs to plan his ideas. Mr.Jones explains that he does not draw. But he always made things, as a sort of compulsion. He made models, picked up cameras, and found other ways to make his images. "But I always felt handicapped, that I can't just draw...I found other ways to work around it. Those memories exist, finding ways to get them out is the problem."

In closing,"The important thing is to keep working. Don't let obstacles stop that process. If it's in (your head) make it clear. The vision is to try it. It's important not to let a lack of resources or disciplinary skills stop that work...I would keep working if all I had was cardboard and crayons. It's a matter of finding a way...If it's well crafted and clear, it can still be brilliant."