Posted by Hannah Raskin at 7:24PM 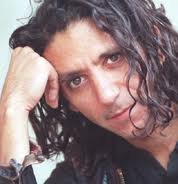 The room is whirring with conversation as we wait to hear from internationally recognized guitarist Robby Aceto.

Aceto will return to FLEFF for his fourth time, as he and his group perform on FLEFF's closing night. The trio will provide the soundtrack to Nanook of the North (1922,) to celebrate its 90th year!

Aceto says to his audience of students: "you're in school now, this is your time to take chances"

"we might do the same film several times, but we will never do the same score. It's not static."

According to Aceto the biggest problem with composing scores for silent films, " is connecting with the mindset of someone a hundred years ago whose making a film. We're looking back at films from the silent era as people in the 21st century. We're so sophisticated with our technology, a hundred years ago these things were just fantasy. There's a tendency to feel a little superior"

"These guys were making films and they were making it up as they went along, they didn't have a lexicon of technology."

"They had to work and think a lot more creatively than a film maker now...." "As an improvisor that speaks to me."

"We've narrowed our expectations of what a film experience is supposed to be- go back to 1912, they weren't able to synchronize sound. There were musicians whose job it was to go to the theater every night and play to the film."

A student in the audience asked why Aceto is referred to as a "Color" guitarist in his FLEFF bio- Aceto replies, "it's a way of differentiating my approach to the instrument , which is in a more textural way...."

One student raises her hand and says what everybody in the room is thinking, "i saw you played with the talking heads." Aceto replies, "yeah i have an ongoing relationship with them..." "jerry harrison asked if I wanted to go to a jam and it ended up being the pilot for a record they were putting out."

Aceto says as he explains the film clip he is about to show, "this is a good case and point where you have a film that is just so outrageous and you have to do something that shows that you took it seriously, and that's what we tried to."

The film, Die Bergkatze or "the wildcat" (1921) is a silent, black and white comedy. The audience chuckles in response to the character's exaggerated movements and expressions. According to Aceto, the director considered it an anti-war/ feminist film.

Our resident film expert and connoisseur, Dr. Zimmerman informs the class that the film was directed by Ernst Lubitsch, a german expressionist. She says that people thought they were slightly crazy for screening Die Bergkatze, because it is generally Lubitsch's Hollywood films that are screened.

But if you ask me, that's what is so great about FLEFF; we screen unique films and provide new and different experiences.