Posted by Meagan McGinnes at 8:06PM 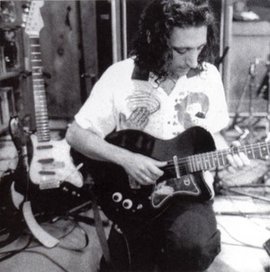 I am sure everyone has heard of a little silent movie called The Artist. The musical score in this film brought the picture to life. The growing popularity of this film within mainstream culture has expanded the somewhat limited view we have about what qualifies as a good movie. For most, a “quality” film means explosions, a good love story and some 3D glasses. FLEFF, with the help of improvisational musician Robby Aceto, is bringing back the idea of beauty within simplicity. And even though there may be no explosions, simple does not mean boring. Because there is nothing boring about improvisational live music to a silent film.

Improvisation is all about evoking a response from the audience. It is interesting to think that improvisation could be considered the utopia for music—if we are applying the definition of utopia as a state of being without guidelines or restrictions. And this is not the only way in which the idea of a utopia, or better yet a microtopia, applies to improvisational music and its process. Aceto states in his improvisational trio, the first thing they need to do is establish a common base for their understanding of the film. There has to be a respect for the wish and intent of the director. Once that communication has taken place and once that basic understanding is met, all factors will work together, even if perspectives and interpretations between the musicians are different. Because differences create a textural sound-scape that allows the pictures to come to life off the screen (and without 3D glasses, imagine that!). As I have said before, FLEFF is all about the texture. In the microtopia FLEFF creates, communication is key. Though we may all be attending FLEFF for different reasons and with different viewpoints, we all have one thing in common: a basic respect for environmental advocacy and art through film. All the other differences, the unexpected interpretations of our minds—or even of the music—add texture, interest and excitement. Something you can’t get from your standard, explosion-filled blockbuster film.

What do you think of the idea that the category of improvisation is a musical microtopia?