Posted by Lindsay Harrop at 2:39PM 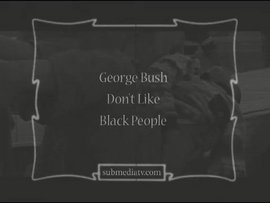 A screencap from "George Bush Don't Like Black People"

Philip Mallory Jones just wrapped his meet-up in Park 220 and now we're on to a conversation with filmmaker Franklin Lopez!

Franklin started out by screening his video "George Bush Don't Like Black People" which he made following Hurricane Katrina and went viral almost immediately. It's a great commentary on the US Government's response to the catastrophe in New Orleans and very much in line with the angry, youthful spirit that a lot of people were feeling at the time.

FL: I was in Atlanta at the time Katrina hit and I was as pissed as anyone. I heard about some people in Houston who took Kanye West's new single "Golddigger" and his statement "Goerge Bush doesn't care about black people" and looped and free-styled it. So then I found hours and hours of Katrina footage and edited this together. I put it online and soon the New York Times got a hold of it and then my server crashed from all the attention.

A: What kind of response did you get?
FL: With this video? It was awesome. I got a lot of bashing on the YouTube page and racist feedback too, which really reminded me that we have a long way to go with anti-racism in this country.

One of my favorite things Frank's said so far is, "I'm not trying to make a living. I'm trying to react. All the work I do is activist with an affinity toward anti-authoritarian."

We're moving on to Frank's video "Why I Love Shoplifting from Big Corporations," a video inspired by an anarchist zine from Crime Think. Also a really interesting one to check out whether you're in Park right now, or anywhere else in the world.

There's a lot of great energy down here in Park 220 and I for one am having a really great time. Frank Lopez is definitely at the center of the new wave of digital and video activism and commentary and I can't wait to be a part of the discussions he's starting.

Franklin will also be screening his movie END:CIV TONIGHT at Cinemapolis at 9:00pm and will be around after for more discussion. If what we've seen so far today is any precursor, it's going to be an awesome experience and I for one can't wait! See you there!