Posted by Kaley Belval at 9:43PM 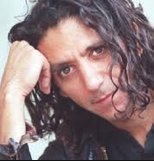 "'Color' Guitarist" Robbie Aceto spoke in front of tonight's FLEFF internship class from, as he said, the perspective of someone who's out there doing things, not teaching about them.

In school, he explained, you don't have to convince anyone that you can take chances, whereas in the real world you have to convince someone to let you take a risk. And this I took to heart, because as he told us, in college we are supposed to take every available opportunity.

Hearing from an industry professional is always an exciting aspect of this experience, and Aceto did not disappoint. This year, he is a part of the intelligence behind the score for the 90th anniversary screening of Nanook of the North.

It was extremely fascinating to hear his work synchronized with silent films such as "The Wildcat" and "Grass," how the music swelled emotion even though no voices or speech were involved.

Silent films of this type are a large part of film history, but sometimes it is hard to stay at the same mindset of someone from a hundred years ago.

Aceto explained the difficulty of writing music without feeling innately superior to those of 100 years ago, because they did not have the current technology that we have. According to him, they had to work and think a lot more creatively than filmmakers do now.

"We've narrowed our expectation of what a film is supposed to be," he said, talking about the predictable patterns of films and the music scores embedded in them. Do you agree? Has our film experience diminished as time has passed? I think so.