Posted by Tianhong Yang at 12:34PM 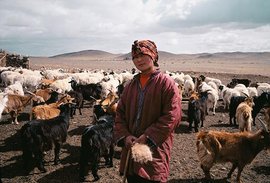 In Mongolia, around half of the population remain nomadic. For centuries, Mongolian herders have roamed the endless grasslands followed by numerous horses, cattle, and sheep. They live in a lifestyle derived from indigenous and cultural practices.

Unfortunately, such tradition is threatened as shown in the documentary, “Losing Ground” (2014).

Recently, an abundance of mineral resources has made the country a target for foreign investors. Transnational corporations enter Mongolia with machinery and dig gigantic holes on the ground. Water is no longer clean. And grass stops to grow. As a result, nomadic life is rapidly declining in the face of industrialization.

In addition, climate change is also adversely affecting the herders’ sustainable way of life. Harsh winters, dwindling herds, and habitat loss are forcing many families to abandon the countryside in order to find work in large cities.

In the film, a mother claims that she owns just a television and a lamp. She is not educated enough to keep up with modern lifestyle. Thus, she sends her children to urban schools away from home. Interestingly, the filmmaker, Bradley Rappa, responds that, in his opinion, the women is well educated for her ability to live in marginal landscapes.

“I wouldn’t be able to live on the plain in Mongolia,” says Prof. Rappa from the Department of Cinema and Photography at Ithaca College.

An old Mongolian herder urges the government to take immediate action to help maintain the grasslands. He asks the officials to contact him when preservation work is in process. However, the government does not seem to care.

Personally, I think such situation represents environmental injustice. Industrial activities lead to pollution that must be paid for by someone else. There is mismatch between decision makers who benefit from mining and vulnerable populations who encounter hazards.