Posted by Colleen Lemos at 2:41PM 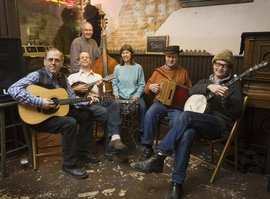 Toivo (pronounced Toy-vo) is back for their third performance at FLEFF!

Toivo is a six piece band, originating from just up the lake in Trumansburg.  They play Finnish, Tex-Mex, and original music suited to the traditional dances of the Finger Lakes Region - waltzes, schottisches, polkas, mazurkas, two-steps, hambos and reels.

I spoke with Richard this afternoon, who told me a little bit more about Toivo.

Meaning "hope" in Finnish, Toivo has been together as a unit for almost seven years, but some of the members have been playing and jamming together much, (almost thirty years), much longer.  Their main desire is to have a friendly band, concentrated in the Ithaca area.

On their website, you can check out their music, learn more about their group, and catch their upcoming performances.

This local gem will be playing at the Finger Lakes Wine Center on Saturday, March 31st, 9 p.m. at the FLEFF after party.