Posted by Kylee Roberts at 1:12PM 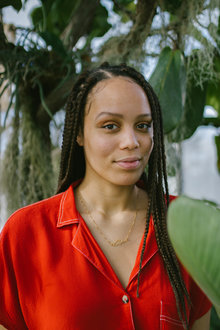 Senior Communications Management and Design Major, Sociology Minor is the Executive Director of Passion Project  and Student Chair for the Diversity Advocates of Park.

Throughout FLEFF 2019 I was surrounded by new faces, including mini-course students, artists, FLEFF faculty and Fellows.

I saw Brittany Fredrick return to her seat from the Fellow’s luncheon in between FLEFF Labs on Friday. The Fellows had just arrived the night before, but I had noticed her eagerness to engage with the filmmakers and distributors during the roundtable discussions.

Honestly, I was slightly intimidated by the Fellows as a majority of them gracefully walked with Black Excellence in a group. On a whim (and on adrenaline), I popped into the seat next to her and introduced myself.  To my delight, the third year PhD candidate was happy to talk with me.

Within the History Department of UMass Amherst, Frederick’s dissertation focuses on black women in the Civil Rights and Black Power movements as they continued to work in higher education.

“I think there is a fluidity of intellectual conduction, resistance and activism in between the social space and spaces of higher education,” Frederick told me. For this reason, the FLEFF 2019 Fellowship seemed to blend all her interests.

Only a few hours in, Frederick was having a good experience with the Fellows: They spent the previous evening finding an abundance of intersections between their research and continuities in various projects. Would you believe that two of the fellows were basically writing the same dissertation, and one of them is studying concrete?

As we continued to talk about black people in higher education, Frederick’s made the point that therefore her dissertation is all about disruptions.

“I can go I can go all day about how representation and presence in physical spaces is a disruption,” Frederick exclaimed.  “Especially in places of education and knowledge production because those spaces were not made for black women or black people and are rooted in enslavement.

This anecdote prompted me to think about the 2015-2016 POC at IC Movement in which students protested for their right to be respected at Ithaca College. With this in mind, I asked:

“What do you think about FLEFF being an interdisciplinary, diverse project that is funded by a PWI (Predominantly white institution)?”

Frederick smiled in agreeance of the implication, but reminded me that impactful movements like the Civil Rights Movement would not have been able to advance without allyship.

“It’s very important that PWI’s participate in initiatives like this,” Frederick continued. “Fun initiatives that advance diversity, inclusion, engagement and representation to include different faces, different voices, different perspectives in things like FLEFF.”

As a black woman working to get a PhD at a PWI, Fredericks has struggled but knows the work is important:

“The stories, voices and memories of black people and activism on college campuses isn’t really memorialized in university archives in the way that white student activism is.”