Posted by Kayla Reopelle at 11:11AM 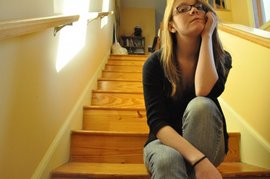 Leslie Thompson, senior Film, Photography and Visual arts major from Annapolis, Maryland, leaned against the black leather couch in the Ithaca College Photo Gallery. She just finished testing some new techniques in the lab for her darkroom photography class.

“[I like] trying out new things, testing and manipulating material, just playing with things, and being okay with failure.”

Thompson transferred to Ithaca last year after studying at the Massachusetts College of Art and Design her freshman year and at a community college near her home her sophomore year.

Photography has been Thompson’s passion for a long time, but during her sophomore year she became interested in film. When she found Ithaca College’s BFA program, she saw it as a perfect fit.

“[Film is] an escape... it’s nice to be able to immerse yourself in something that isn’t necessarily your reality. Opposite of that, pretty much 90 percent of my photography is self portraits.

“Both [are] honestly a nice way to express yourself without having to be loud about it. You can hide behind it a little bit, but you can still get your thoughts out there.”

When she came to Ithaca, she saw FLEFF T-shirts and stickers everywhere. Once she learned what the acronym stood for, she wanted to get involved.

“I’ve been interested in film festivals from afar. I had never really worked on them. I had some experience working with Bonnaroo, music festivals, so it seemed like a really good opportunity to do something...with my peers and experience what a film festival is.”

Thompson took the Festivals mini-course last year and works as an intern for the festival this year.

She’s looking forward to interacting with filmmakers. Thompson expects it will be challenging, yet beneficial: challenging because she isn’t comfortable with “casual schmoozing,” beneficial for the different perspectives these filmmakers acquired through their work in the field.

Her advice for students is to immerse themselves in the festival.

“Go to as many films as you can. I didn’t go to quite as many as I could have last [year] and I think it was definitely a missed opportunity. If you can swing it or afford it definitely go as much as you can.”