Posted by Amber Thibault at 5:34PM 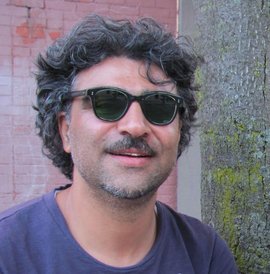 Mansoor Behnam is a thinker. We spent the first half of our conversation on the sunny saturday afternoon talking about how his literature and theater background have been influential to his filmmaking. He's working on his Ph.D at Queens University with a major in Cultural Studies, letting his studies inform his filmmaking.

Last year, Behnam came to FLEFF as a graduate fellow and had a great time talking to people and engaging intellectually with other scholars. Coming this year, he is excited to continue to meet people and share ideas.

Behnam "When you produce something, you really want to share it with people. I love the Q&A sessions afterwards."

When I ask him why he came back to FLEFF, Behnam said, "When you find wonderful people to be around, you just want to be around them more and more."

In the first, "Organon", Behnam wanted to explore the idea of thinking while moving and how it relates to the human condition. He talked about when he moved to Canada he started taking evening walks again. Behnam used these walks to explore his place in time and space to really think about, "who I am and how can I build myself now?"

Behnam is also sharing two films he co-produced: "Tango Flaneur" and "Cup of Coffee with Kafka"

"Tango Flaneur" was produced by Behnam with his classmate at Queens University Lisa Elin Figge. Together they decided to take a look at people in urban space and urban culture. Within this space they present how it is more difficult for people with a disability to get around than for able-body people.

Behnam felt they "have to share that with other people so they can be awakened, so they can change reality."

"Cup of Coffee with Kafka" was produced by Behnam with his colleague Felipe Quetzalcoatl. They wanted to create space for a diverse voices about movement and transit. Behnam said "ideas move quickly, people move quickly" so they interviewed different people on this idea in order to create an objective presentation.

"Organon" and "Tango Flaneur" will be screened Thursday April 4th at Ithaca College in Roy Park School of Communications Rm. 273 at 2:35pm

"Cup of Coffee with Kafka" will be screened Thursday April 4th at Ithaca College in Williams Hall Rm. 202 at 5:25pm