Posted by Sarah Lockwood at 4:36PM 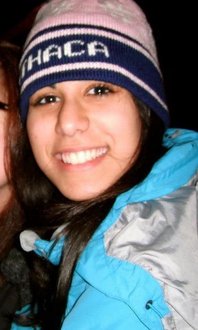 A few weeks ago I had the pleasure of sitting down with Stephanie Khoury - who goes by Steph - a fellow freshman and FLEFF Intern like myself.

Some quick facts about Steph include the following:

What I found most intriguing about Stephanie was her major - it was not originally her major of choice!

For Steph, high school provided art and video production classes, all of which sparked her interest and creativity. However these alone were not enough to push her in the direction of a definitive college major. She had though halfheartedly about attending an art school or major in art, however the sentiments were not fully realized.

Then began the long, arduous journey towards choosing a college...

In a sea of college applications and campus tours, Stephanie and her family passed a sign for Ithaca College, a school that some of her friends had recommended in passing. Nearly on a whim, she took the tour and ended up applying - and, eventually, attending!

Steph's interest in documentary works and environmental activism brought her to the Finger Lakes Environmental Film Festival - where we are happy to have her this year!