Q & A with Dr. Annette Levine

Posted by Alexis Lanza at 3:04PM 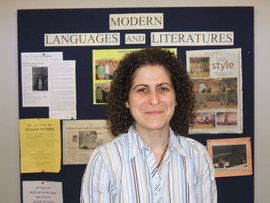 Dr. Annette Levine is a professor in the Department of Modern Languages and Literatures. She teaches classes in Spanish and Latin American Studies. Dr. Levine spoke about her involvement with FLEFF via e-mail.

Q: What is your educational background?

A: I hold a Master's degree in Latin American and Caribbean Studies from the University of Chicago and a PhD from UC Santa Barbara in Hispanic Languages and Literatures. My background is primarily at the intersection of literary studies and trauma studies with an emphasis on migration, exile, and dictatorships.

Q: How long have you been involved in FLEFF?

Q. Can you elaborate on / describe on your involvement with FLEFF?

A. I have hosted FLEFF films in my courses.

Q. What is your mini-course about this semester and how does it relate to this year's FLEFF theme: Dissonance?

A. The mini-course I’m teaching “American Dreams” is about the perceptions we have of the ‘American Dream’ and its almost mythic proportions. In this mini-course we’ll explore portrayals of the American Dream in readings and films pertaining to Latin American and the Latino/a reality in the United States. The mini-course relates to the theme of dissonance in that the films and readings present the contradictions inherent in the ‘dream’: who may enjoy the inalienable rights of “Life, liberty, and the pursuit of happiness?”

Q: How are students made aware about the mini- courses? Do you usually have a full class of students?

A. This will be my first time offering a mini-course.

Q. What does “dissonance” mean to you?

A. That which sounds “off” but in essence reveals an almost unbearable truth that must be heeded.