Posted by Kayla Reopelle at 6:44PM 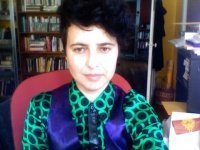 Dr. Claudia Pederson has worked with the Finger Lakes Environmental Film Festival for eight years. This year she became assistant curator for new media. In an e-mail interview, she discussed her experience with the festival, her insights into the Viral Dissonance project, and what she is looking forward to for the 17th Annual Finger Lakes Environmental Film Festival.

How would you describe yourself?

What are you interested in intellectually? What do you love to learn about?

My interests are in the digital arts. My main focus is on art, technology, and activism. I am especially interested in practices connected to social change, their histories and theoretical references.

How did you get involved with FLEFF?

Happenstance. I have been working with FLEFF since 2007. That year the festival was hosting an event on memes and they were also interested in my research on video games. I lectured on Molledindustria's work, the "McDonald's" game, for a class involved with the festival and it stuck.

What positions have you held with the festival?

Guest lecturer, workshop organizer, I have designed co-taught courses on digital art and critical design, organized a panel on new media and activist practices, served as new media curatorial adviser, taught a course on film festivals, was a moderator for special events, and currently I am an assistant curator for the new media exhibit of the festival.

What was one of your favorite experiences you have had with FLEFF?

All of it. Especially the courses were a lot of fun to design and teach. We also had the opportunity to freely invite emerging artists from the U.S. and elsewhere, theorists, and curators working in new media, which was a great experience for us and the students at Ithaca College. The curation of the new media part of the festival in which I am engaged now is an extension of that. As a curator I get to see great work and connect with exciting projects and artists.

What are your duties as assistant curator for new media?

Network artists, curators, and others engaged in the field of new media around the world. Work collaboratively to organize the exhibit.

How does new media function in a film festival’s environment?

Historically there are crossovers between film and computers (which are not as new a medium as thought). Nor are film festivals just about films alone. New media is part of the broader context of events in FLEFF, including music, lectures, workshops, etc.; you may think of it as a media environment, very broadly interpreted.

Each year the directors of FLEFF, Professors Patricia Zimmermann and Tom Shevory, suggest a theme that serves to guide the conceptual framework of the festival. The theme is not so much used to circumscribe but to open up discussion. As a concept guiding the exhibit, Dissonance both reflects the gist of our cultural moment as well as hints at strategies or ways to intervene in our conditions. We look for works that engage with both of these facets.

What is one thing you are excited about for this year’s festival?

That is precisely it, there isn't one thing, but many. The surprises and the unexpected are always the best part of the festival.

Is there anything else you would like to add?

Because for most students at IC this will be their first festival, they are generally apprehensive about attending. Don't be. FLEFF is an opportunity to immerse yourself in intellectual life beyond your classroom. Come watch the films, ask questions, meet directors, go to concerts, attend the workshops and parties. Come prepared with questions and an open-mind. Think of FLEFF as an opportunity to be among people with common interests, a passion for learning.