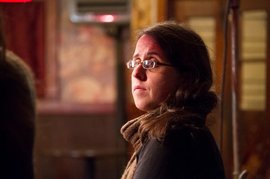 Ms. Karen Rodriguez, the curator for the Upstate Filmmaker's Showcase screening, has worked with the Finger Lakes Environmental Film Festival for three years. Over the phone, she discussed her involvement with FLEFF, curating processes, and film background.

Describe your role as a curator for FLEFF.

I've been putting together the Upstate Short screening for the last two years, finding local Ithaca and upstate NY filmmakers who are doing interesting work to showcase during FLEFF. I contact them, preview their work, and put it together. This year I'm also putting together a screening of work from the Cornell Lab of Ornithology.

Last semester I read an article about curating and I thought it was interesting to read about the “in between space” that occurs when screening films. Can you talk about what your curating process is?

Sometimes there will be pieces that have compositional strategies that resonate, so I'll put those in sequence. Sometimes I make more content driven or thematic decisions. And since a lot of the work is experimental and some of the films are formally challenging so I think about how to place those so that the audience gets the most out of the experience. I usually try to start the show with something that I think that is really, really strong and end it with something that is even stronger, so people go out with a bang.

I'm actually doing both, so I'm seeking out works that are new, or new to the audience and then I'm also putting it together into a flow so the films compliment one another.

Can you tell me about your personal experience with film? Did you study film as an undergraduate student?

I studied film at Boston University when I was in undergrad. While there, I studied American Independent filmmakers like John Cassavetes, Elaine May, Rick Schmidt, and Mark Rappaport. After undergrad, I got my first paid job working on one of Rick Schmidt's films and then started to work in the film industry as a lighting and camera technician in Seattle. While I worked on commercial films for a living, I also attended screenings of independent and experimental work at 911 Media Arts Center and later the Northwest Film Forum. I was interested in filmmaking from a do- it- yourself/ punk- rock perspective which eventually led me to graduate school at the University of Iowa where there was a strong emphasis on experimental and personal documentary. The work I produced there, and since, has screened in independent film festivals across North America and in Europe. After graduating with my MFA, I started teaching film.

How was your teaching experience?

I taught at Emerson College for a few years and then I taught at Ithaca College. It was a real privilege to work with students who are passionate about film and who are trying to find their voices in a technically challenging medium.

What are you doing now?

Last year, I started working at the Cornell Lab of Ornithology in the Multimedia Department which produces films on natural history and conservation.

What does this year's FLEF theme: Dissonance mean to you?

Dissonance is an exciting theme for this year. Independent media is an interesting form of cultural dissonance providing a counterpoint to mainstream media. FLEFF is a great venue for bringing that kind of counterpoint to Ithaca. It allows people to see different points of views and see films that you aren't going to get to see elsewhere.

What are you most looking forward to about FLEFF this year?