Posted by Peter Keahey at 8:05PM 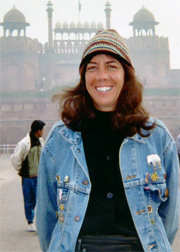 I recently had the opportunity to speak with Ithaca College Professor, Jodi Cohen. She is a professor of communications at Ithaca College, and teaches lessons of public communication, theory, modern criticism, and rhetoric. Before Ithaca College, Jodi spent time studying in Colorado. She has brought her knowledge and experience from those times back to Ithaca to share with her students. This year for FLEFF, she is teaching a mini-course titled, "Tipping Points." which explores human involvement in creating change.

Peter: When did you first become involved with FLEFF?

Jodi: I don’t know. It was after patty brought it to Ithaca. FLEFF was at Cornell before then. When I was on the board at Cinemapolis, Patty and Tom came and the theatre became involved and I went to see all of the FLEFF films at Cinemapolis, which I would have done anyway.

Peter: What brought you to Ithaca from Colorado?

Jodi: I went to Penn State for my PhD and I taught there. I would love to go back to Colorado or to Utah or somewhere like that. I came to Ithaca for personal reasons. My husband was living in Albany and I got a job in Ithaca College. I like the small, informal school, unlike Penn State’s corporate-like image. Ithaca was much more my style.

Peter: Did you always want to have a focus on communications?

Jodi: Yes, ever since I was in high school. Like many young people today, I was interested in media, TV editing and filming, but I’m not good at it. I can’t handle the tension. I’m an excellent editor, but the business of media isn’t a good fit for me. It’s much too intense. I was much more interested in politics and rhetoric: persuasion and political, social, and environmental issues.

Peter: How long have you been involved with FLEFF?

Jodi: Since Patty had it, maybe in 2000. So 10-11 years. I joined the first or second year that Patty and Tom had it. Cinemapolis went nonprofit in 2000 and I joined the board there and Patty was the president of that board, but she had other obligations including to FLEFF.

Peter: How did you become involved with Cinemapolis?

Jodi: Through an IC student, Brent Runyon. He has published some books since his graduation. He worked for Len and Rich who owned Cinemapolis. He was a student of mine and I went to the movies and lot so I saw him in class and at Cinemapolis. He introduced me to Len and Rich and they turned the theaters into nonprofit when they couldn’t maintain a business and they created a board of their friends, including me. I had experience on a board for the YMCA in Portland. Patty pulled it together and I was the president after she resigned.

First we focused on becoming nonprofit. Nick Davis was a Cornell student and he was president after me until he graduated. Cinemapolis was still floundering a little and I became president again after Nick for about 5 years and we really got it together with bylaws and a 12-member board and a community presence. Len and Rich inspired us and ran the theater. But regal was building their new theater and they were bad for our nonprofit business. We were fundraising to maintain and Len Cohen (no relation) really kept everybody going. We fought regal to stay out of downtown. Cinemapolis is doing very well now after all the steps of getting the building and putting up the theater and getting the city to agree and to be there without regal, it all took a lot of persuasion.

Peter: As the presidents of the board of Cinemapolis, what were your responsibilities?

Jodi: I was basically a people manager and I took care of any issues that needed dealing with. A board president is an arranger: manage people, run meetings, plan agendas, deal with conflict. I educated myself about nonprofit and I worked to keep board members and get them involve and resolve conflict. I also talked to Len and Rich and the Cinemapolis employees, but didn’t that’s not a presidential responsibility. The logic of a board is sometimes curious. Boards tend to deal more with finances and not with films: budget and fundraise and worry about the mission. If there is ever a problem with Cinemapolis, the board takes care of it.

Jodi: I had just read the book and it was the first thing that popped into my mind for creating classes. Most films will deal with tipping points: what caused an event or series of events to happen and how people can become involved in making change.

Peter: Are you using FLEFF screenings as part of the mini-course?

Jodi: Yes, students will watch FLEFF films and read the book Tipping Points and watch whatever movies with whatever tipping points interest them. That will be the framework.

Peter: What do you hope students will take away from your mini-course?

Jodi: Three things: 1) Understand the value and the limits of the theory of Malcolm Gladwell’s theory in Tipping Points. 2) Develop their own interests and acquire new interests in topics through watching films. 3) Understand and have a sense of how they can make a difference in the issues that they care about. If something needs to be tipped, how they can play a role in that or if something is tipping and they want to stop it, how will they recognize that and stop it. I don’t know if Gladwell’s theory will always work and students should be reflective of that. Theory is not truth; it has holes.