Posted by Dorothea Hinman at 9:43PM 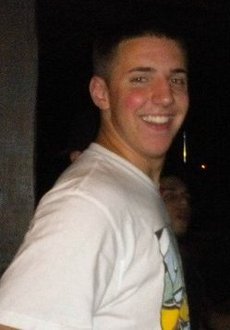 "FLEFF has now become something that’s fun for me. It helps me get away from the work and it’s very easy for me to talk to people, to set up a discussion."

Truer words could not have been spoken by Jonathan Morello. I recently had the privilege of sitting down and chatting with FLEFF's very own Assistant to the Co-directors, who indeed loves discussion.

Jonathan has an undergraduate degree in journalism from Hofstra University and is now a graduate student at Ithaca College, pursuing a master's degree in Communications. We delved into everything from his background, his current responsibilities at Cinemapolis with Scott Bliss, to his responsibilities in mobilizing and helping the interns.

Upon discussing the festival with Jonathan, it became very clear as to why Jonathan became involved in FLEFF.

"I’m studying Strategic Communications, so I’m getting my Master of Science in Communications with a focus in Corporate Communication, Strategic Communication and Management. I’m getting a lot of management experience working with all of the interns and bloggers. One of my biggest roles is working side by side with Scott Bliss at Cinemapolis. I’m working with him to sell on screen advertising. Right now my responsibilities include working through the list, calling businesses up. Some advertisers might want to renew, some people might never have heard of screen advertising or Cinemapolis before. The people I’m hitting up first are the people who want to renew. When I go out and try to find new people, I don’t cold call them. I go into the business, approach them, see if they’re interested. One of my great conversation starters is FLEFF. It’s a great plug: I say there’s going to be this huge festival, there’s going to be a ton of people from Ithaca. It's also a great way to generate conversation about the festival."

Jonathan is just as new to the festival world as some of the first time interns and bloggers, (and that includes me!).

"I’m brand new to this. Except I started in August. It’s been fun so far, I’ve learned a lot. Definitely patience. I’ve learned how to react fast; react quickly. It used to take me a long time to send a long email, for example. Now I can fire out a long email no problem. When you’re fast at it and you can send up to 20 to 30 emails a day and talk to multiple different people, it's a plus. It’s a great experience as far as time management goes. Today I've already had a bunch of meetings in a row with the team leaders and the assistants to talk about flash mobs, and now I’m sitting down with you."

The fact that Jonathan is new to the festival this year gives him a unique angle on managing the interns.

"A big role of mine is mentoring, putting myself in the shoes of undergraduates, and trying to help them walk through this process in the sense of learning to go from a student in a classroom to a professional working on an international film festival."

He takes his role as a mentor seriously, often wishing the interns would use him as a resource a bit more often.

"Anytime you’re feeling nervous or concerned, just let me know and we could talk through it because half the time talking through it helps. Because usually we can take it down and it’s probably not as big of a deal as you think it is. I kind of wish the intern class would communicate with me a little more, I have office hours, I send emails reminding people I am available for that. I did the one on one info sessions in the beginning to meet you guys and talk about the festival, generate your ideas, I just wish I could carry that more. It’s a resource. Even if you want me to look at your resume, professional help, professional development."

Although any new endeavor has its fair share of ups and downs, Jonathan continues to look at the whole thing as a fruitful, worthwhile experience for himself and the interns.

"It’s very rewarding, especially working with all you guys and watching the internship program develop into something that you all can put down on your resumes. To have an opportunity to have an internship on campus that allows you to add one line to your resume with four bullets underneath is tremendous."

Jonathan has been a wonderful asset to the FLEFF team, and has learned a lot in return. He will conclude his graduate program on June 25th after starting in the spring of 2012.

What have you learned from Jonathan and/or FLEFF?