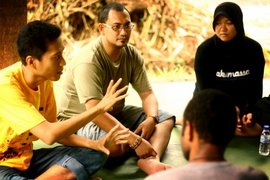 New media mogul Enrico Aditjondro thinks the future of media is mobile. Do you?

I was recently privileged to chat with Enrico Aditjondro, writer/producer/content manager for EngageMedia  in Indonesia. While it may be a winter wonderland in Ithaca, NY, it's rainy and hot lately in Jakarta. Aditjondro juried for the Distributed Microtopias Exhibition , which recently announced  Null Sets by Amy Szczepanski and Evan Meaney as the Jury Prize winner. I was eager to get the scoop on the exhibition prize selection process as well as the outlook on the future of new media. Enrico answered all of my questions and gave me more to think about regarding Mobilities. Check out part of our interview:

Karly Placek: So why did you choose Null Sets for the Distributed Microtopias Exhibition Prize? Also, could you explain the selection process?

Enrico Aditjondro: Well I collaborated with Dale [Hudson, exhibition curator] to analyze the work. Null Sets stood out because it found an interesting way to represent numbers and data visually. This project was trying to make numbers look cool and exciting, which is very hard to do! It also utilizes materials already online in places such as Google Libraries  which was what we were looking for as well. You want to create something new but there are a lot of resources already out there to utilize.

KP: What impressed you the most about the overall work of the artists?

EA: The artists had a tough topic to address. It's not every day you have to think about a subject like microtopias. It had to have been challenging for participants to come up with ideas. They all put in a large amount of work to make creative projects that addressed the idea differently and looked stunning visually.

Coming Soon: Part Two of our interview, where we discuss EngageMedia and the rise of new media!