Posted by Amber Thibault at 4:52PM 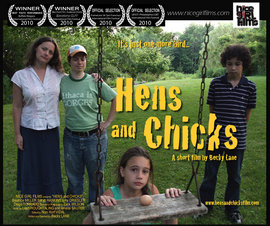 This past week, I had the privilege of interviewing Becky Lane. Becky Lane is a part time TVR professor at the Roy H. Park School of Communications. She has submitted two works to next week's March 3rd kick-off event happening THIS SUNDAY at Cinemapolis! The event starts at 4pm and tickets are $8.

Amber Thibault: How did you hear about FLEFF?

Becky Lane: Ithaca is my home so I've followed FLEFF from it's inception. When Karen Rodriguez, the curator of the Upstate Filmmakers Showcase, program invited me to present my work, I was honored. Ithaca College has been an instrumental part of my education as a filmmaker, and I was so excited to become a part of FLEFF and screen alongside the other fantastic pieces.

AT: What is your project that you are presenting at the March 3rd kick-off event?

AT: Can you tell me a little bit about those films?

BL: "Hens and Chicks" is a family film about a young girl who is a sperm donor offspring who begins to question who her father is. "Happy Hour" is teaser for a dramatic series I'm working on entitled "The Chanticleer." It's set in 1955 and one of the storylines involves underground gay and lesbian culture.

AT: I know there is going to be a whole collection of different types of works at the event this on March 3rd. Can you tell me about the kind of work you are presenting?

BL: Well, "Hens and Chicks" is a short film while "Happy Hour" is a more of a performance piece with dance and music. It tells a story about how two women make a connection that only they can see, reflecting the invisibility that was required at that time period. The series that follows will have a broader scope, reflecting the cultural and political shifts occurring at that time period, which were significant. The goal is to have distribution with some episodes exclusively made for the web.

BL: I like to portray strong women characters, families and gender and sexualties that are usually unrepresented, misunderstood, and/or not favorable. In the first film, Hens and Chicks, I wanted to show that there are different types of well-adjusted families. For "Happy Hour" I wanted to highlight the oppression many people faced then [during the mid-twenty century in regard to their sexuality]. in regard to their sexuality]. People are resilient, though, and will find ways to live their lives the way they want. I wanted to honor that. I see these women as courageous and subversive.

Having already been aware of the suppression of women during this time period, I am anxious to see Becky Lane's physical representation of these circumstances. Also, having been involved in theater before coming to college, I can't help but loving the melding of dance and music to create an emotionally charged scene. I hope you all found this interview as intriguing as I did. Please come out and support Becky Lane and all the other filmmakers as we raise money to help Cinemapolis with it's conversion from film to digital.

One final question: What interests YOU most about Becky Lane's projects?