Recap: The Crowd with Live music by Cloud Chamber Orchestra

Posted by Kimberly Capehart at 7:40PM 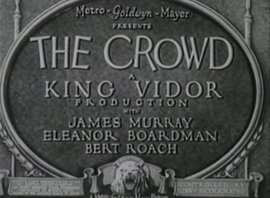 The smooth electroacoustic musings of piano, cello, electric guitar, percussion, and brass provided a larger than life sensory experience: transporting the audience to the young energy and business of 1920s Manhattan. Sitting there in the theater, shoulder to shoulder with a crowd of community members, the resonances between art and life became too obvious to ignore.

The group has performed original, improvised film scores for films such as Nanook of the North, The Cabinet of Dr. Caligari, and The Great White Trail, among others, and continues to be an annual favorite at FLEFF favorite.

The Crowd "addresses the life and travails of a "common" married couple as they struggle to survive in a large and impersonal metropolis. The film is generally included on lists of greatest of all American films and was chosen as one of the first twenty-five selected by the Library Congress for permanent preservation."

Chris White, the cellist of the group, writes in an email correspondence, " I think that this was the most poignant film we have scored. Being a father, a husband and having lived through a lot of the ups and downs portrayed in the movie, I felt very empathetic with the kinds of hardships that the main characters were facing. Even though this all took place a century ago, it addresses real human experiences and feelings that are still pertinent to today, and I hope that our music helped underscore that."

What did you think of The Crowd and Cloud Chamber Orchestra?