Posted by Shea Lynch at 9:06PM 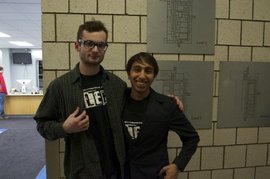 I would like to thank everyone that was apart of FLEFF 2013!

It was one of the best years yet and we had one of the most engaged intern teams, both bloggers and interns. It’s time to say goodbye as I finish up my last semester here at Ithaca College. It has been a great three semesters for me and I’m glad that I got the opportunity to work alongside festival guests, fellow classmates and Dr. Zimmermann.

When I first started FLEFF, I was nervous. I didn’t really know what to expect. I was suddenly thrown into this world of independent media, complex foreign films and of course tabling! This was such a unique experience to my other classes that it became a breath of fresh air. I was forced to think differently and I was challenged to explore areas of film I was otherwise hesitant to touch.

I became a blogger my first year because I had never immersed myself in this style of writing; I didn’t even know it was a style of writing. Tags? Search Engine Optimization? I was still trying to figure out where to sit in the dining halls.

But with this leap of faith, I gained something valuable. I was able to focus my studies and really understand what I wanted to do after college. I understood the world of social interaction online and learned it takes much more than just posting on Facebook. Much like the films we were writing about, the process of pushing out new information was a complex, multi-layered process.

I now feel prepared and ready to start my path as a community manager for film festivals or museums.