Posted by Kayla Reopelle at 11:25PM 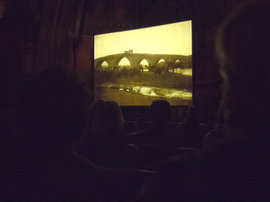 “So many strange peoples and hardships...”

The projector froze on the title card after I allowed myself to be sutured into the Cornell Cinema and Finger Lakes Environmental Film Festival sponsored screening of Grass: A Nation’s Battle for Life (1925) in Cornell’s Sage Chapel. Cloud Chamber Orchestra, an Ithaca-based live improvisational film scoring trio, accompanied the silent film.

Grass follows the migration of the Bakhtiari nomadic tribe from Persia, today Iran, on their seasonal quest through rivers with strong currents and steep, snowy mountains to reach the pastures that support every level of their society. It was filmed and edited from the point of view of three Americans, two men and one woman.

“So many strange peoples and hardships.” It held for a few more moments.

The orchestra played on as vibrant, as soothing as ever. The sound filled the chapel. In other situations this may have caused a pause, but the Cloud Chamber Orchestra just kept playing, kept people from talking as if this interlude was planned.

The projector was turned off. For a moment, I thought we were permanently moving from watching a film to listening to a concert. People began to stir.

The power of film as a mediating factor became clear. Phones were pulled out, people were moving. Once the projector was brought back online, the crowd snapped back into their disciplined state.

The film returned a few minutes prior to the moment it cut out. The music had a different interpretation, a new tempo reminding that a performance by the Cloud Chamber Orchestra is always up for re-negotiation and is not repeatable.

The classical instruments blended with digital looping kept the melody driving, changing, cycling without a clear end or beginning to each sound. It flowed in and out from scene to scene like the simulated sounds of grass blowing in the wind that seamlessly integrated into the score.

This performance exemplified dissonance due to the unplanned pauses throughout the screening. Transforming unexpected glitches into new interpretations and experiences is part of what Cloud Chamber Orchestra does best. Their improvisation continues unhindered despite whatever chaos technology may throw at them.

I’m glad the the freezing temperatures on Tuesday, January 28 interfered with the projection. It made this screening into an unrepeatable event.

When has something you planned not gone the way you expected, and turned out to be a more fulfilling experience in the end?