Posted by Colleen Lemos at 3:00PM 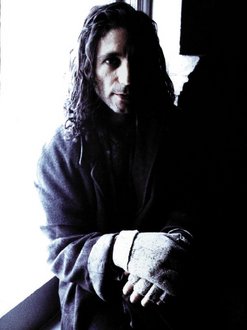 “The baseline is respect,” he said. “Even though you can have completely different views, they can still work together as long as you have respect.”

And there it is. Collaboration. Adaptation. Appreciation. Microtopias.

“[When performing live music you must] Embrace accidents, figure out ways to utilize them, and not allow them to cause disaster, which waits at every moment,” Aceto said.

“You have to be in control of the environment. Not making sound is just as crucial as making sound. Embrace the silence.”

Even though just speaking about improvisational music, I believe Robby really captured the essence of FLEFF, and I felt very touched and inspired by his words.

This year marks the 90th anniversary of Robert Flaherty’s “Nanook of the North” and I can’t even begin to express how excited I am to watch it with a live score.

Flaherty’s portrayal of Nanook and his family, although slightly fabricated, is a beautiful romanticized film about the life of the Inuit people, and I’ve never watched it with any sort of accompaniment – just dimmed buzzing classroom fluorescents.

Aceto stated that most of his trio’s scores are pretty modern, yet “vocative of place and time.”

He told the FLEFF interns that his trio inhibits the mindset of the filmmaker. They take into consideration what his wishes might be, and what the filmmaker achieved with his film at the time of its creation.

Although a child of the technological age, I sometimes feel as if I was born in the wrong era. I wish I could have witnessed life in a simpler time, without the instant gratification of technology.

From the vantage point of a 21st century citizen, technology we have today was just pure fantasy to those at the time of “Nanook of the North.”

Aceto also told the interns, “In a way now, we can feel superior to [the filmmakers then], but they were making it up as they went along, and they had to think much more creatively than a filmmaker now. “

“We’ve narrowed our expectations of what a film experience should be,” he said, and I agree.

The trio’s performance on the closing night of FLEFF will be the first silent film I've ever experienced with a live score, and I personally think that it’s a tradition that although seemingly archaic, is a lost and under appreciated art form!