Seeing Stories in Social Movements with Palika Makam (Part One)

Posted by Kylee Roberts at 11:16AM 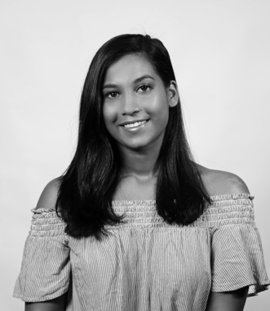 This is the question Palika Makam has constantly been asking her entire career. This year Makam will be joining FLEFF in a panel discussion about WITNESS and the Eyes On ICE project: Programs dedicated to providing human rights struggles with technological assistance.

Makam believes her career has been shaped around making sense of her marginalized identity; from an early interest in journalism and a sudden shift to social justice work.As a Chicago native coming from a South Asian home life, Makam remembers being the translator for her parents as they navigated everyday life.

“It got to the point where people would automatically look at me, expecting me to explain to my parents,” Makam said. Outside of her family, Makam occupied predominantly white spaces, dealing with the traumas of  code-switching and observations of racial disparity.

Makam’s aptitude for observations evolved around 13-years-old when she was given, We Wish to Inform You That Tomorrow We Will Be Killed with Our Families by Philip Gourevitch. The book reflects on Gourevitch’s five years of travel to Rwanda after the Rwandan Genocide in 1994. Struck by the strength and meaning of the work, Makam took every opportunity she could to become a journalist.

“I wanted to do what he did! I wanted to be an international reporter with long form storytelling…” Makam beamed over the phone. “I wanted to make sense of the world through journalism.”

From school newspapers to internships, Makam did anything she could to gain journalistic experience. After high school, she left for New York University studying journalism and social & cultural analysis.

“[Social and cultural analysis] encompassed any human rights, identities studies,” Makam explained. “So through that major I learned a lot about the history of social movements, of organizing; of activists.”

Through these classes, Makam’s mind— for a lack of a better term — was blown by the history, especially in regards to media coverage. Case in point: After taking a photography in social justice course, she learned photographing marginalized people at the heart of movements for artistic and journalistic purposes could promote inequality.

Makam took this knowledge to The New School where she studied media and culture in the International Affairs Masters program. Rather than writing a thesis or conducting a project for a non-profit organization for her final, Makam and a colleague headed a four month pilot program called the Babel Project. In Cape Town, South Africa, the graduate students trained youth organizers to utilize media to promote their work.

“Youth organizers are at the heart of social justice work,” Makam said. She believes the people with the answers are the people most affected by the problems, and in that, young people should be at the forefront of these movements.

One of the two campaigns produced in the year Makam lived in Cape Town was used in a court case against the Minister of Basic Education, leading to a historic win on the organizers’ behalf.

After three years of running the Babel Project and expanding to places like Ferguson, Missouri, and West Bank, Palestine, Makam wanted to hyper-focus on one space. In a fortuitous moment, a position to help develop US programming for WITNESS opened up and Makam was thrilled to take it on.

This year will mark eight years Makam has been working in the niche space of media and human rights development and two years at WITNESS.

“We are in a moment where we can also disrupt the status quo of how ICE operates, how border patrol operates,” Makam reflected.  “We can actually take a lens, look at, and disrupt our immigration policies.”

To find out more about Palika Makam, her work with WITNESS and panel discussion at FLEFF 2019 by FLEFF intern, Molly Bandelli here.