Posted by Hannah Basciano at 9:09PM 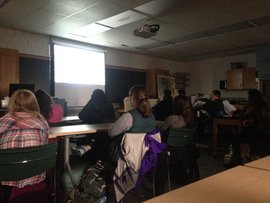 For the past three months, my Principles of Sustainability course at Ithaca College has talked about the rate at which humans are consuming the earth’s resources. We’ve discussed topics including global climate change, deforestation, factory farming, fracking, over-population—all discussions that have brought the class to a single conclusion: we are not living sustainably.

However, today’s morning section was met with a real-life example of an alternative, sustainable, agriculture method in action.

The FLEFF film, by award-winning documentarian Michael Tyburski, follows a group of ambitious young urban agriculturalists stationed in the heart of Brooklyn as they create a new farm on the rooftop of the Navy Yard Building.

A roof of green in a field of cement.

As the film moves from month to month—chronicling the roofs design to the first plant and growth—the audience grew increasingly more invested in the project.

Samantha Weil, a student in the sustainability course, said, “the film really humanized what we’re learning about and showed how to make these abstract ideas a reality.”

After the credits rolled, the students, along with other individuals that joined the festival’s event, were eager to talk about the projects feasibility, effectiveness, and overall success.

One gentleman immediately mentioned the economic benefits of growing and purchasing locally grown crops, while a student followed up with a comment on the project’s ability to mitigate air pollution or potentially combat the consequences of the urban heat island effect if it were adopted on a larger scale.

The Professor moderating the discussion beamed at the front of the room as the habitat within the class bustled with ideas, shared concerns, and hope for a sustainable future.

“I think that most people in society are very distant to where their food is produced, and it’s a huge issue for our food system,” commented Professor of the class, and active environmentalist, Paula Turkon.

Her eyes, along with the rest of the audience’s, widened as the film revealed that the urban farm produces more than fifty-thousand pounds of seventy-five different crops.

Turkon left the conversation with an open-ended question for the audience, and for future audiences of the film—“Can we continue living with the rate of consumption if we adapt to these new practices?”

FLEFF has created habitats of inquiry and ideas like these all week, and it will continue to do so until Sunday! To see what events are coming up, click here!

What are some of your favorite conversations inspired by a FLEFF film or event so far?