Posted by Tianhong Yang at 7:17PM 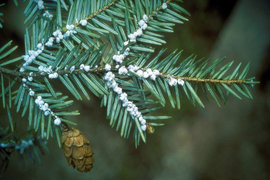 Don’t Move Firewood, for trees are being destroyed through the transportation of invasive species. Native to Asia, the infamous emerald ash borer has killed millions of ash trees in North America since 2002, causing enormous financial loss.

Chris Foito’s short documentary, “the Hemlock Wooly Adelgid” has recapitulated the ash tree blight. The hemlock woolly adelgid, a non-native pest, continues to cause extensive mortality of eastern hemlocks in the U. S. Its large impact is comparable to that of the emerald ash borer.

Prof. Mark Whitmore in the Department of Natural Resources at Cornell University explains that the hemlock woolly adelgid is infesting nearly half of the native hemlock trees in New York State. Currently, forest managers and private citizens are encouraged to treat infected hemlocks on their properties using pesticides. Although Prof. Whitmore personally opposes chemical pesticides, he mentions that the pesticides for the hemlock woolly adelgid have yet approved to cause minimum environmental effects. Such pesticides are injected into hemlocks unlike others that are sprayed on crops.

In Japan, the hemlock woolly adelgid is a common but innocuous inhabitant due to its natural predators. Therefore, Prof. Whitmore points out that it is ideal to decrease the pest population by biological control. In fact, a small amount of predatory beetles, Laricobius nigrinus, have been released throughout the forests. However, transporting beetles from Japan or establishing them in North America is no easy task.

“There’s a bajilion adelgids,” says Whitmore, “and we are distributing five hundred beetles at most.”

As the hemlock woolly adelgid develops resilience of low temperatures, to manage the pest becomes challenging. Thus, Prof. Whitmore urges citizen scientists and natural resource managers to report areas threatened by such invasive species via iMapInvasives, which is a GIS-based data management system.