The Significance of SHAH

Posted by Tianhong Yang at 10:15PM 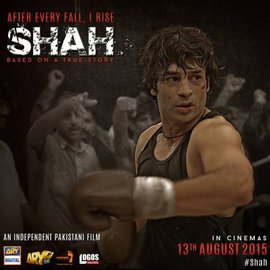 Growing up as a homeless child, Hussain Shah gained fame as a boxer. His talent and commitment allowed him to become the best boxer in South Asia, who won a bronze medal at the 1988 Seoul Olympics. However, soon after the glory, Shah was forgotten by the Pakistani people and gradually suffered from poverty. His job as a construction worker left him destitute.

The story of Shah achieved a big cinematic hit in Pakistan, and the North American premiere of the internationally acclaimed film will kick off the 19th annual Finger Lakes Environmental Film Festival on Sunday, February 21, at Cinemapolis.

Following the screening, Adnan Sarwar, the film’s producer, director, screenwriter, lead actor, and composer, will take part in an open discussion. To fit in the role of Hussain Shah, Sarwar underwent a six-month boxing program with intense training. In addition, Sarwar composed the soundtrack of SHAH and directed the film production, which took place in Pakistan, United Kingdom, and Japan.

Raza Rumi, Scholar in Residence at Ithaca College will moderate the discussion. Raza Rumi is an author, policy analyst, and journalist from Pakistan. His writings are published in Foreign Policy, Huffington Post, New York Times, The Diplomat, Fair Observer, CNN, and Indian Express. He continues to be the consulting editor for The Friday Times, Pakistan’s first Independent weekly paper. Currently, Raza Rumi teaches courses on South Asia studies at Ithaca College and participates in campus conferences.

Raza Rumi, who consistently speaks out against extremism on mass media sites, was under the surveillance of Islamists in Pakistan. He narrowly survived a gun attack that claimed the life of his driver in Lahore in March, 2014. Shortly after, Rumi left Pakistan and flew to the U.S. He has been a fellow at the New America Foundation, United States Institute of Peace, and the National Endowment for Democracy.