Theater in a Theater

Posted by Hannah Basciano at 12:02PM 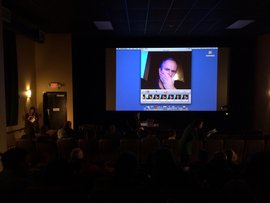 A middle-aged man, dressed professionally in dark slacks and blazer, sits alone in his small inner-city Brooklyn apartment. His thick, Balkan accent rises over the obnoxious sound of a cellphone ringing incessantly. In a desperate state of solitude, he is accompanied only by the image

A young woman paces nervously. She is pretty, but distress pains her soft features. She rambles to herself, and to the cat she holds as dear as a human companion. Her anxiety is potent.

A young girl, a student, speaks rapidly and urgently into the phone glued to her ear. Her tone is that of distress, confusion, and guilt. She is alone in her struggle, haunted, though she actively

The three are alienated, yet they are so close together.

FLEFF’s first ever theatrical performance by world-renowned playwright Saviana Stanescu, Hurt, features three individuals separated into habitats of isolation. Throughout the performance they speak about each other, and of the situations they share, but never to one another. The tension becomes palpable as the audience becomes more and more aware of the consequences their lack of communication causes.

The tension grows even stronger with the introduction of a gun.

Stanescu’s goal was to create a story advocating for communication. She feels that the recent decrease in social interaction has caused so many tragedies to occur, such as bombings and mass-shootings.  “If people could just stop for a moment and get out of their bubble, maybe we could stop these bad things from happening.”

Originally a journalist in her hometown of Bucharest, Stanescu is deeply in tune with political issues. She explores these problems within her work, creating realistic contingencies that parallel true events.

This particular story, that made its movie theater debut on the last day of the film festival, leaves open-ended with the audience wanting more.

“My hope is that everyone will imagine something different…This is the beauty of it, the ambiguity.”

Stanescu was very excited to have her work included in FLEFF.

“The play was perfect for the festival because it is thought provoking. It adds to the conversation. It creates an amazing intersection between, theater, media arts, and film.”

Did you see Hurt at FLEFFF? What did you image

happened at the end of the story?