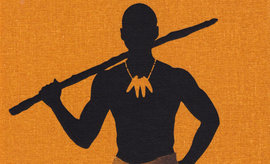 Chinua Achebe, often referred to as the father of modern African literature, has described the English language as something that “history has forced down our throat.”

Interestingly enough his - arguably - most influential book, Things Fall Apart, is written in English as opposed to his native Igbo.  Conflict, contradiction and paradox surface as themes often in Achebe’s work.

FLEFF describes habitats as areas subject to constant flux and possessing levels of complexity.  These areas can function as havens and also sites of conflict and violence.  Cultural procedures and expectations work to mold habitats.

Things Fall Apart details village life in Nigeria as the British Empire begins to colonize.  The story centers around a local strongman named Okonkwo.  Okonkwo acts to maintain the identity of his people, The Igbo, as his surroundings shift.

“Turning and turning in the widening gyre

The falcon cannot hear the falconer;

Mere anarchy is loosed upon the world.”

Interestingly Achebe excises the parts of the poem that are specifically Christian in nature.  For example he has removed reference to Bethlehem.

Ironically this broadens the possible interpretations so that the Christian missionaries themselves may be seen as instruments of destruction since they disrupt the cultural and physical habitat of the Nigerian village.  This is one example of the contradictions that Achebe creates.

Over the course of the book elements of the Igbo people’s initial habitat are gradually stripped away.  First their religion begins to lose adherents to the missionaries, then the government loses its authority, and English begins to dominate the linguistic aspect of their culture.

This reminds me of a thought experiment called The Sorites Paradox that asks if you take away grains of sand from a pile one at a time when does it stop being a pile?  One grain?  Two grains?  Three grains?  And so on.

Essentially Achebe’s scenario asks how many elements a habitat can lose before its identity dissolves away?

This book breaks down the concept of habitat and seems to point towards the idea that a habitat can be paradoxical and contradictory.  The FLEFF online of a habitat allows for constant conflict and contradiction.

Things Fall Apart also focuses on conflict between the villagers, the environment, Christianity, the British and even technology like guns and bicycles.

What definition of habitats do you subscribe to?  Or perhaps there is a second, third or even fourth definition that also applies?

This year Dr. Tanya Saunders, the executive producer of FLEFF, described how the festival has incorporated a less narrow definition of the environment.  In a similar way previously narrowly defined concepts, like habitats, can also be pushed outward in order access unintuitive ideas.