Posted by Rachael Lewis-Krisky at 1:33PM 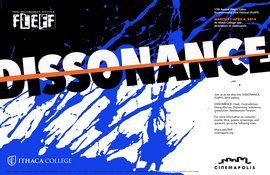 Ex-felons face stigmas and exclusion when they move back into their communities. However, Ira McKinley proves his status will not stop him from bringing positive change to his home in Albany, NY. Despite also being homeless, McKinley’s strives to reveal the marginalized by giving them back their voices. This is a no-brainer, not to miss. Playing Sunday at 2:00pm.

As a soon-to-be Ithaca College Documentary Studies and Production graduate, this documentary is an inspiring example for me. Made by 4 young adults, the documentary explores the world of natural burials as a “last gift” to the planet. Playing Thursday at 7:00pm and Saturday at 12:00pm.

As a recent explorer of South Africa, a country that has stolen my heart, this film is examines the serious issues of public health care for AIDs victims. A powerful quote from a subject of the film said, “If it was 30/40 million white people who didn’t have access to treatment, it would be the most important question you could possibility imagine.” This documentary packs a punch to the heart and the mind. Playing Friday at 9:10pm and Sunday at 7:20pm.

A “banned film” never fails to peek my interest. This Chinese film by Zhang Ke Jia has faced government censorship since 2004. The intense and graphic film follows four characters driven to violent ends by the realities of a corrupt and fast growing economy. Playing Thursday at 7:20pm and Sunday at 9:00pm.

Foreign documentaries always remind me of the vast world we live in, where people’s experiences stretch far beyond the confines of U.S. issues. After Argentina’s last economic collapse, the paper recycling industry exploded, including the common trash picker to executives at large corporate mills. Playing Thursday at 7:10pm.

Tags: A Fire in the Blood, A Touch of Sin, A Will for the Woods, Cartoneros, The Throwaways