Top Five: Moments from the Concert for Microtopias

Posted by Kacey Deamer at 4:56PM 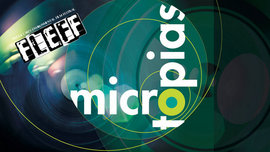 I hope you all were able to make it to Hockett Hall last night for the Concert for Microtopias. If not, you should also read intern blogger Meagan McGinnes' post about the concert as a whole. She delves into the concert's connection to FLEFF's theme of microtopias.

The following is a list of my top five moments — though there were many more than five — from last night's concert. I've allowed myself some poetic license in the descriptions.

1. Pianos. Dueling pianos can be found in jazz bars across the country. I have experienced a few of them. But piano duets, now that is something special. Jairo Geronymo and Deborah Martin were perfectly in tune as their fingers danced across the keys creating an beautiful harmony. "Two Step" was one of my favorites, a more lively duet that conjured the image of swing dancers in 1950s garb smiling as they moved around stage.

2. Fabric. How do you dress a stage for such an integrative performance as the Concert for Microtopias? You use fabric, hanging from the walls. But, one sheer pink/purple piece of fabric lay across the stage, available for use by the performers. Which brings me to number 3.

3. "Lullaby." Brad Hougham has the voice of an angel, and as he sang to the piece of fabric (bundled and held like a baby) I had tears well up in my eyes. There was such a tenderness to his performance, a tangible love he displayed. It was powerful.

4. Farewell. The closing piece, a reading of the "Microtopias Benediction," brilliantly summarized the FLEFF theme. But Cynthia Henderson stole the show when she found a young boy in the audience just as she came to the line: "Microtopias never stay the same." The boy's father visibly had a 'knowing' reaction and the entire interaction was simply beautiful.

5. Water. Dr. Hougham had mentioned his apprehension to perform "Wade in the Water," an African-American spiritual song connected to the suffering of slaves. During the intern session in February, Hougham had said it is incredibly difficult to perform a song such as this without having a connection to those experiences. I must say, his apprehension was needless. I could hear a desperation in his voice, but there was hopefulness as well. The vibrato he held on the last "r" of "water" before he started to move on stage was incredible.

The concert as a whole was beautifully executed, but those were a few of the elements that I am still thinking about today. What stuck with you from the concert?