Posted by Tianhong Yang at 4:41PM 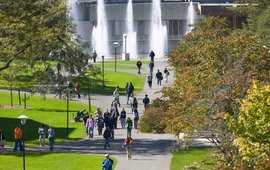 With over one hundred events at the 19th Finger Lakes Environmental Film Festival, it can be overwhelming for film festival attendees. However, a little prep work will help maximize your experiences throughout the week of FLEFF. To start off, you should figure out the top events that interest you the most based on the schedule.

I have complied a list of on campus events which I look forward to next week.

Paul Vanouse is an artist who has been working in Emerging Media forms since the early 1990s. His artworks address complex issues raised by techno-sciences, which refer to the technological and social context of sciences. Prof. Vanouse will showcase his bio-art projects examining the ramification of categorization. The festival opening lecture is sponsored by the Department of Health Promotion and Physical Education.

Seth Soulstein is a co-founder of the Harry Potter Alliance. He has spent seven years traveling in the U.S. and making viral videos, the Late Night Players. He is currently pursuing a PhD in the Department of Performing and Media Arts at Cornell University. The Harry Potter Alliance turns fans into heroes through the power of story. They have engaged millions of fans to solve the world’s problems such as inequality and illiteracy.

The opening concert is a collaborative multimedia concert featuring music performed by Ithaca College Women’s Chorale, School of Music faculty, and a wide variety of guest performers. The concert displays landscapes as open and closed, natural and artificial, reverence and nostalgia.

Wednesday 3/30 at 6 at Handewerker Gallery

Ithaca City of Asylum is part of a worldwide network of cities of asylum, supporting writers who are persecuted in their own countries. Mr. Raza Rumi is Ithaca City of Asylum’s 6th international resident from Pakistan. Mr. Raza Rumi, Scholar in Residence at Ithaca College, is also an author, policy analyst, and journalist. His writings have been published in Foreign Policy, Huffington Post, New York Times, The Diplomat, Fair Observer, CNN, and Indian Express.