Posted by Gabriella LoBue at 5:01PM 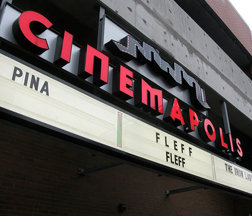 FLEFF is a mere week and a half away, and Cinemapolis will be hosting a plethora of films and events for the 2016 festival. Many of the films are centered on socially relevant topics such as environmental rights, and injustices surrounding race, gender, and sexuality. Here are five films that offer a taste of the assorted selection of programming that will be screened at Cinemapolis this year.

1. Taxi (2015). Ride alongside Iranian director Jafar Panahi in this drama/comedy as he sidesteps his banned filmmaker status. As he circles the streets of Tehran in his taxi, Panahi persuades his passengers to speak about their concerns, fears, hopes, and expectations of contemporary life in Iran, all within the four walls of the cab. Runtime of 82 minutes.

2. Circumstance (2011). Unearth the hidden, underground Iranian youth culture in this provocative coming-of-age story following Atafeh and her brother, Mehran. The exuberance and autonomy of these young adults’ lives, filled with sex, drugs, and defiance, is explored. Runtime of 105 minutes.

3. Three Sisters (2015). Despite being the youngest female members of a multi-generational farming family, three Chinese sisters, ages 10, 6, and 4, are expected to contribute to their family’s income. The girls live alone until the two youngest sisters are moved to the city with their father, leaving the eldest with her grandfather. This documentary not only explores poverty in China, but also offers a study in human behavior as the girls retain their youthful spirit despite their early loss of innocence. Runtime of 153 minutes.

4. After the Spill (2015). It has been ten years since Hurricane Katrina struck the United States’ southern coast, and five years after the infamous BP Oil Spill devastated the Gulf of Mexico. Now, five years worth of changes to the Louisiana coastline are explored, documenting some of the most aggrieved victims, as well as those who are desperately trying to save the disappearing landscape. Runtime of 62 minutes.

Showtimes for each film can be found on the FLEFF website, and a full list of all Cinemapolis films and events can be found here.

What Cinemapolis film(s) are you most looking forward to seeing?