Posted by Chloe Wilson at 7:38PM 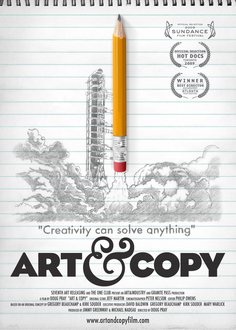 I love movies.  Seriously, I am absolutely crazy about them.  So when FLEFF posted the FLEFF 2012 Film Descriptions and Trailers, I geeked out.

I recommend checking out the entire list, but here are five FLEFF 2012 films that are giving me that warm, fuzzy feeling inside.

1. Nanook of the North

I know I already talked about this in an earlier post, but Robby Aceto, Peter Dodge, and Chris White will be improvising live music to the film.  Nanook of the North is considered the world's first documentary and it was also one of the first 25 films to be selected for preservation in the United States National Film Registry by the Library of Congress.  It's considered to be one of the most culturally and historically relevant films of all time.  I can't wait to see it!

A film from 2009, this film discusses the history of the advertising industry and its relationship to inspiration.  Art Copy introduces audiences to some of the most influential creative minds of our time, which I'm especially excited for because the geniuses behind advertising campaigns are hardly ever publicly praised.  As somebody who doesn't know much about advertising but loves Mad Men, I'm stoked.

To be honest, I'm immediately a fan of anything that promotes equality, and Gay Games is no exception.  The film documents a sports competition that lacks customary rules, encouraging all participants to focus on respecting each other for their differences.  The film highlights the coming together over over ten thousand people in Köln, Germany, known to Americans as Cologne, Germany. (Sidenote: Germany is a beautiful country and Cologne is a beautiful city. I hope there's some great scenic shots!)

You know what's crazy about this film?  It was filmed in fourteen different countries.  That's so many!  One Water addresses the global freshwater crisis and is a result of collaboration between individual schools within the University of Miami.  Having clean drinking water is a serious global issue, but I'm excited to see the results of a project that was the result of college students!

Documentarian Ian Cheney filmed his adventure that started with him planting a garden in his grandfather's old pickup truck and that follows his discovery of some of the world's coolest urban gardens.  Personally, my family and I tried gardening once and I got food poisoning from one of the few edible products (which wasn't so edible, I guess) so I'm jealous of Cheney's gardening skills.  I can't wait to learn about urban gardening though!  Maybe I'll get some pointers.

What about you, FLEFFers?  Anything you're excited to see at FLEFF?