What I Cant Stop Thinking About: Dissonance and My FLEFF Experience

Posted by Kayla Reopelle at 6:56PM 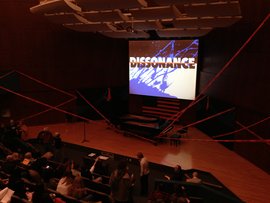 Maybe thinking about dissonance will make us think more about consonance?

This question, posed by Dr. Deborah Martin, professor of piano at Ithaca College and performer at the dissonance concert, stuck with me as I traveled through the festival. Dissonance requires some consensus to function, if the dissenting voice is not considered, it will fade away.

We are uncomfortable with dissonance.

While watching The Throwaways by Ira McKinley and Bhawin Suchak, I wanted to rationalize my complicity in the prison industrial complex because I had studied it.

However, the scene where Ira interviews a white woman who walked past a vigil for a black man killed the day before made me realize how separate my life is from so many of these problems, purely because of my white privilege. This problem will not get better unless we stop making excuses and start facing the institutionalized racism in our political system.

Dissonance cannot be understood by looking at the big picture.

Sometimes it needs to be broken into smaller pieces before it can be digested. Jonathan Miller took this approach for Food for the 9 Billion’s focus on bite-sized stories about different elements of the food crisis.

When confronted with dissonance, we can capitalize on it. We can try to make something new from it.

These kinds of dissonances create opportunities to investigate why and how they came to be. Interventions such as the Indeterminate Hikes+ app created by Eco Art Tech reveal the interactions between speed and urban space.

I faced dissonance at every event and during every conversation during the week of the festival. Dissonance kept me asking questions to find resolution. It made me listen and simmer in the conflicts.

How has dissonance stuck with you?