Why Opera? An Interview with Tenor Daniel Bates

Posted by Sean Murphy at 4:01PM 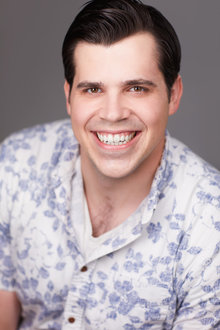 Daniel Bates, opera tenor, always knew he wanted to be involved with music. However, it didn’t go exactly as planned, and it’s all the better for it. But why opera?

While attending Ithaca College, Bates originally majored in recording technology, but found the language to be too scientific and mathematical than actual vocal performance.

“The behind the scenes stuff just wasn’t for me, I felt my best self when I was actually performing, so I changed my major and never looked back.”

And just like that, Bates auditioned for the opera, found himself landing a tiny role, and dove head first into a world of performance where he was tested as a creative.

There are no set guidelines to becoming an opera singer. There are no rule books or step by step tutorials where the path to success is laid out in highlighter. You have to find it for yourself.

Bates first arrived at graduate school at the San Francisco Conservatory which laid the roadwork for learning every facet of vocal performance.

“I next found myself in Young Artists programs, which were residencies with opera companies that lasted roughly seven to nine months. I’ve traveled to Louisiana, Miami, Texas, all this incredible places.”

These residencies Bates attended were not just dedicated to strengthening an artist’s talents, but were also committed to outreach to schools in the area in order to educate future generations of artists.

“We went to schools all over the area, I think...yeah probably every school in Louisiana.”

Bates wants people to know that opera is about bringing people together, to experience and expand your horizons, to promote discourse and discussion and debate.

“To me, music has always been a social environment, a living thing. With recording technology, for all its benefits, kind of dulls us to what we’re truly capable of experiencing, and we want to celebrate people.”

Opera singers are storytellers. Though they might not seem to be the conventional depiction of what a “storyteller” is, they invite you to witness live music with a genuine presence on stage, a luxury all too often taken for granted.

“Today you have artists who have to hide behind choreography and heavy auto-tune, which is just the market, really. But as an opera singer, you’re the only one there. Your voice is the only tool you have at your disposal, and nothing is more terrifying and gratifying than that.”

Bates and his partner, Elena Galván, now find themselves as guest artists based in Ithaca, New York,  the same city where they both attended college.

“With any medium, but especially opera, we’re encouraging people to have an experience. Live music is something people take for granted and leaving a concert where you’ve authentically felt something true, I mean, what more can you ask for?”