Posted by Patricia Zimmermann at 6:07PM 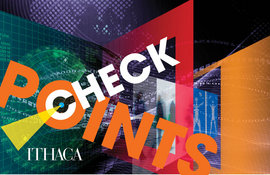 Examines how various economic and financial controversies have been portrayed in popular and documentary films. Students will explore such topics as the Enron fiasco, the Great Depression, and more recently the collapse of the banking industry and the housing market. Students will use their knowledge to analyze and compare FLEFF 2011 films. 1 cr. LA Instructor John McKinley Thursday 6-7:15 pm.

The tipping point is the moment of critical mass, the threshold, the boiling point. It is the moment when protests become revolutions, popular you-tube videos become viral, and deforesting becomes devastating. We will consider the forces that bring about tipping points, including the power of individuals to fuel and/or restrain such moments. Topics will be determined by students’ interests. Our only constraint is that we be informed by our reading of Malcolm Gladwell’s, The Tipping Point, and our participation in FLEFF events and screenings. 1 cr. LA Professor Jodi Cohen, Communication Studies Thursdays 12:15-1:30 pm

Can games make the world better? Can they encourage cooperation, problem-solving, and altruism in ways that affect ordinary lives and address social and economic problems? In this mini-course, we’ll read Jane McGonigal’s new book Reality is Broken and engage her thesis that games can change the world for good. We will play a “checkpoints” game and decide if simulations can teach us something about the real world and the problems associated with a utopian vision. Students will attend several FLEFF films and examine how the "rules" at work in real-life social situations challenge the thesis that games can teach us how to change the world. 1 cr. LA Rachel Wagner, Assistant Professor, Philosophy and Religion MW 4-6 pm

A river forces its way through rock.  A four lane highway chokes down to one. A huge line forms at airport security.  Checkpoints occur in both the natural and man-made world.  Where pressure builds, drama will soon follow. This mini-course examines the recurring theme of a checkpoint as a source of drama film.  We will analyze FLEFF screenings, plus classic recent indie and Hollywood features where the narrative is tied directly to a specific environment; physical, political and otherwise.   1 cr. LA Andy Watts, lecturer, Cinema, Photography, and Media Arts M 6-8:30 pm

Explores the foundations and applications of public health through readings and the films and events of FLEFF.  Students will explore the role of media in generating ideas, propagating myths, and influencing decisions about health. Students will attend films and participate in FLEFF events during the Festival week. 1 cr. LA Associate Professor Stewart Auyash, Health Promotion and Physical Education W 4-5:15 Hill 54.