Posted by Thomas Shevory at 1:42PM 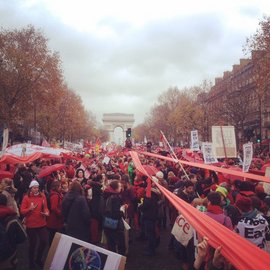 Yesterday I attended the civil society demonstration held in downtown Paris, rather than head up to the official ceremony at the COP.   The conference website stated that, given expected crowds, you needed a ticket, and implied that they would difficult to get. Given that I’d probably just end up watching the video feed, it didn’t seem quite worth it.

A few people were mingling about in the shadow of the Arc de Triumph as I arrived. The street had been blocked from traffic, and a line of police vehicles and helmeted officers with shields prevented any movement forward.  The French government, it seemed, had compromised.  It wouldn’t deter us from gathering, but it wouldn’t allow us to march into the city center either.

I was wondering if these policies were out of concern for safety, but someone at the demo told me that main organizers had been placed under house arrest leading up to the November 29th event, which is one of the reasons it ended in arrests and some violence.  The state of emergency was being used as an opportunity to suppress dissent.

By about noon, the street started to fill up. Hand-pumped foghorns announced the official start of the demonstration. People gave impromptu speeches; a brass band played; two people in polar bear costumes wandered around; an electric guitar-playing Santa entertained anyone who would listen; “sustain-a-claus,” also in a Santa suit, hectored us about our buying habits. And there were, of course, the ubiquitous signs and banners. Large shiny silver air-inflated cubes were tossed up and down the street as people batted them along through the air.

Participants had been asked to wear something red (to signify a climate emergency), and, for those like myself, who didn’t have anything, ribbons were distributed. Eventually long pieces of red cloth were unfurled, and we held them up over our heads, then laid them on the ground as (organically grown) red tulips were placed on top of them. These represented the red lines that can't be crossed in efforts to stop climate change and support climate justice.

Things were pretty festive, and i didn’t get the impression that anyone was going to start breaking windows.  Perhaps the perception that the conference hadn’t ended in abject failure helped to promote a positive atmosphere.  Later, on the BBC, I saw interviews with protestors who were clearly dissatisfied. But the people I talked with seemed hopeful.  The agreement isn’t perfect, by any means, but a possible important step forward.

After two hours, we received texts on our cell phones that the event was over,  and it was time to disperse.  Foghorns blasted to make it official. (I  took my turn at pumping). I decided to spend the rest of the afternoon in central Paris, which I’d never seen before, and, sure enough, ran into a later protest at the Eiffel Tower, which I joined as well.

With regards to the deal itself, many of the principles demanded by the high ambition coalition have been kept, although they seem more aspirational than  definitive.  The agreement has been criticized for being vague and not having teeth, but in that way it reflects the realities of international agreements in general. They ultimately rely upon the good faith and commitment of the signatories. There are no international climate police.  This is the beginning of a very long process.

One of the reasons that enforcement provisions had to be kept undefined was to avoid the agreement from becoming a binding treaty under U.S. law, and thus requiring Senate approval.  195 countries agreed to the 39 page document, without dissent; yet it would be unlikely to garner that many votes if it were placed before the U.S. House of Representatives.

In fact, not one single elected Republican official was here. The comments section of The New York Times coverage had more than its share of denialisms and warnings that the agreement would wreck the economy.  But such is the state of affairs as I head back home.  Dante said there was a special place in hell reserved for those who fell on the wrong side of history.  Well, actually, he didn’t say that, but he should have, so I'll say it for him.